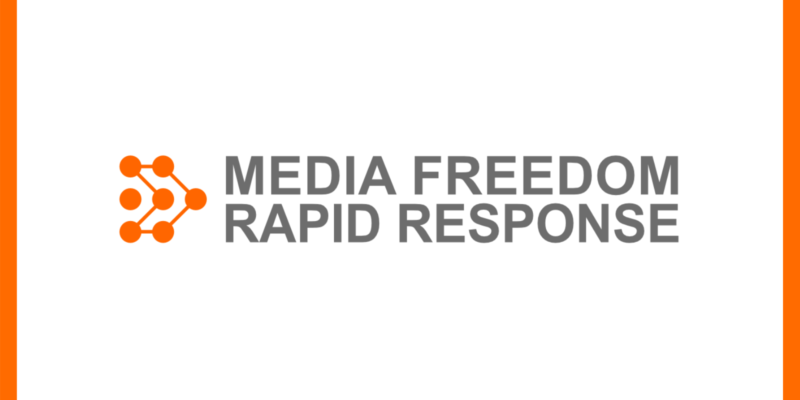 The Trade Union of Media of Montenegro (SMCG) joined partners of the Media Freedom Rapid Response (MFRR) to renew our call for an end to impunity for the shooting of investigative journalist Olivera Lakić in 2018 and hope the recent arrest of suspects will lead to all those involved ultimately facing justice.

Our organisations also welcome the recent cross party approval of amendments to the criminal code which will strengthen protections for journalists but stress the need for further reforms to create a safe and open environment for independent journalism.

Lakić, an investigative journalist covering organised crime and corruption for the daily Vijesti, was shot in the leg outside her apartment in Podgorica on 8 May 2018. She was wounded but survived after being treated in hospital. The attack was first classified as attempted murder but later changed to grievous bodily harm.

Prosecutors said the motive for the attack was Lakić’s investigations into local crime gangs and their links with regional criminal organisations. Although numerous suspects were arrested in the wake of the attack, more than three and a half years later no one has been brought to trial for the broad daylight shooting and Lakić remains under police protection.

On 17 December 2021, Montenegro’s High Court ordered the 30-day detention of Branislav Karadzic and police officer Darko Lalovic, who are suspected by the Special State Prosecutor’s Office of following Lakić before the attack and passing on information about her movements to the “Kavac” drug gang. Concerningly, the officer worked in the same department of the police that is responsible for providing security for Lakić. If proven, involvement of the officer would be devastating for trust in the police force.

While the recent arrests are a welcome development, no formal indictments have been brought against them or any of those suspected of involvement in the shooting. Overall, progress in prosecuting those behind the attack remains painfully slow. Multiple members of the drug gang, including the alleged gunman, have been formally identified as suspects. However, the case remains in the investigation phase. Due to the sensitivity of the case, the High Prosecutors Office (HPO) and the Special Prosecutors Office (SPO) are declining to disclose secret information to the Commission for Monitoring the Competences of Threats and Violence Against Journalists, meaning little information is publicly available.

Our organisations see Olivera Lakić’s case as a litmus test for both the independence of the judicial system and the stated aims of the new government to improve the climate for media freedom by tackling cases of ingrained impunity for attacks on journalists. The 2004 killing of the director and editor-in-chief of the daily newspaper Dan, Dusko Jovanovic, remains mired in impunity, casting a dark shadow over the country’s landscape for media freedom. As Deputy Prime Minister Dritan Abazovic rightly noted recently, no journalist in Montenegro can feel fully safe until that case is solved.

A legal system in which these kinds of serious physical attacks on media workers are punished with appropriate sanctions is crucial. It is uplifting therefore that on December 29 the Parliament of Montenegro unanimously voted to pass amendments to the criminal code which prescribe stronger criminal protection of journalists. We praise the dedicated efforts of Montenegrin journalists’ unions, NGOs and civil society organisations which developed the bill in cooperation with the Ministry of Justice. Under the new law, those convicted of causing grievous bodily harm to those engaged in the dissemination of public information – as in the case of Olivera Lakić – will face penalties of up to eight years in prison instead of the current five years, with stricter punishments for journalists’ killers.

The passing of this legislation marks a welcome step forward on media freedom for the government of Prime Minister Zdravko Krivokapić. To be fully effective, it must be accompanied by funding for capacity building for law enforcement authorities and strong implementation of the legislation by prosecutors. A complementary next step in the fight for justice for journalists would be hiring a foreign expert to investigate Dusko Jovanovic’s murder. Though such an appointment was approved by the former Commission for Investigation of Attacks on Journalists three years ago, no action has since been taken. We urge the current administration to reverse this situation and address other recommendations of the Commission.

While the recent legislative development is welcome, much remains to be done to improve the wider situation for media freedom and independent journalists in Montenegro. As well as the major cases of engrained impunity, the day-to-day safety of journalists and precarious working conditions remain an issue of concern. Verbal and physical attacks and threats against journalists and media workers remain common. The attacks on Vijesti Television journalist Sead Sadiković in March 2021, the death threats sent to Antena M editor-in-chief Darko Sukovic and columnist Dragan Bursać in May, and the intimidation of Milka Tadić Mijović in August all illustrate the type of threats journalists face for doing their jobs. Denunciation by officials of all attacks and intimidation of journalists remains vital.

Separately, but of equal importance, efforts to complete the reform of Radio Television of Montenegro (RTCG) from a state media to a public service media must be handled in a non-political manner and always with the goal of increasing its independence and professionalism. Management changes and the appointment in June 2021 of a new RTCG Council are recognised as having led to more pluralistic coverage. However, future proposals to adapt the public broadcaster’s funding model must be conducted in close consultation with journalists groups and relevant international media organizations. Legislation is required to ensure the independence of the media and the transparency of ownership. Meanwhile, the conviction and sentencing to one year in prison of investigative journalist Jovo Martinović remains a major issue of concern for our organisations.

Much remains to be done to dismantle the entrenched polarisation in Montenegro that poses continued challenges for the independence of public service broadcasters; the state’s response to crimes against journalists; and the fair allocation of state support to media via advertising. The new administration must oversee reforms which roll back the state capture of regulatory bodies and create an even playing field for the media to work free from interference and pressure. There are no quick fixes here and significant political will is required. Yet hope for progress remains amongst the country’s journalistic community. Our organisations stand ready to support the work of the Commission and the government of Montenegro in achieving these goals.