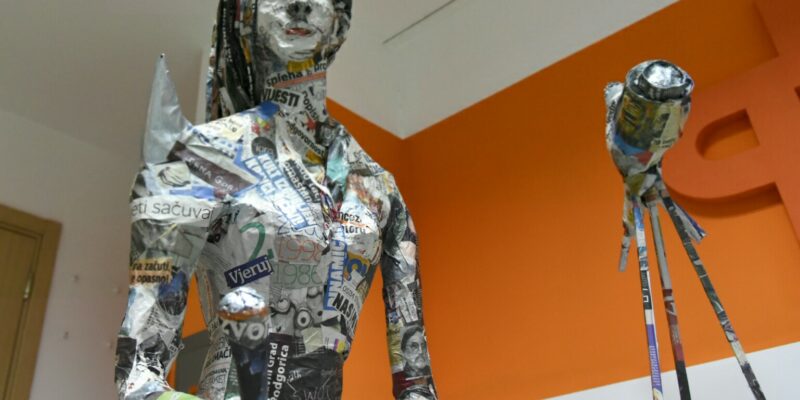 On 3rdMay, World Press Freedom Day, which draws attention to the principles of media freedom and raise awareness on its importance, Trade Union of Media of Montenegro issued the Proclamation and pointed out that journalism must become trustworthy profession.

We present the full text of the Proclamation:

Employees in Montenegrin mediaawait World Press Freedom Day deprived of rights and overloaded with work which often is not paid.

Their economic situation during the last five years deteriorated according to the opinion of 83 percent media employees. They work in conditions of constant fear of cancellation, reduction or non-payment of wages. They are censored, andalsodue to poor working conditions and pressuresvery prone to self-censorship.

Number of employees in media decreases year over year and attitude of employers toward employees is reflected in the fact that for eight monthsnow they have been ignoring the request of TUMM to start negotiations on a new Branch CollectiveAgreement.

Number of media decreases as well, and as a rule employees remain deprived of number of earnings, taxes and contributions. The latest example is TVin bankruptcyAtlas, which has no assets but the state allowed it to accumulate debts of nearly three million euros, out of which a large part are debts to employees.

Almost none of local public services regularly pays salaries to employees. These media are financed in an unsustainable manner but neither local authorities nor state try to do something to change it.

The state is still only formally committed to addressing the cases of attacks on journalists. There is an impression that it is only waited for the statute of limitations to expire for the most drastic cases, as has already happened with the brutal beating of journalist MladenStojović.Meanwhile, Montenegro allows itself the “luxury” to arrest and detain,for even 14 months,journalistJovoMartinović and thus aligns itself with Turkey, Russia, Azerbaijan and Macedonia, the only European countries where journalists are currently detained.

In the upcoming period Trade Union of Media will demand from the prosecution and the police concrete actions in order to actualise again cases of attacks on journalists and media assets, especially those endangered by the statute of limitations, and finally come to a solution. We believe that  authorities,with full attention,must re-examine all the facts and findings related to these events, due to which we have been labelled in the Brussels – the headquarters of the European Union to which we strive for – as the state with no progress in the area of media freedom.

Journalism must become trustworthy profession and journalists and other media employees should not experience any kindof pressures. Until media owners and the state as well understand that,Montenegro will continue to stagnate or fall lower and lower when it comes to freedom of the media.

End attacks on journalists in Macedonia