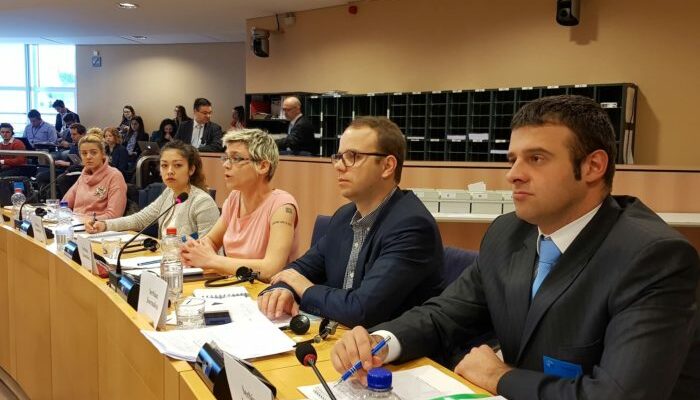 A delegation of the Western Balkans’ Regional Platform project for advocating media freedom and journalists’ safety visited Brussels on March 21st and 22nd and held meetings and consultations with the members of the European Parliament and representatives of the European Commission from the Directorate General for Neighbourhood and Enlargement negotiations.

Representatives of journalists’ associations and a trade union from Bosnia and Herzegovina, Macedonia, Montenegro and Serbia presented the journalists’ safety and the media situation in their countries. They emphasized joint problems their members and other journalists face, including poor working conditions, fear for personal safety due to work, political and economic pressures resulting in censorship and self-censorship. In such environment, unprofessional journalism thrives and media pluralism is endangered. It was noted that problems faced by journalists mainly come from the ruling and mainstream political parties who demonstrated lack of political will to work improving the state of media freedom. It was underlined that impunity of attacks on journalists remains the biggest problem.

The representatives attended a joint plenary session of the European Parliament Committee on Foreign Affairs and Security and Defence (AFET-SEDE) focused on EC strategic communication, foreign influence on media, misinformation and fake news. Touching upon mentioned problems, the delegation drew attention that those are the consequences of lacking legal and social environment for journalists to work in public interest and provide citizens with the information they need to make an informed choice.

During bilateral meetings, delegation shared findings of their research Indicators on the level of media freedom and journalists’ safety for 2017 highlighting the issues that need urgent attention for each country. MEPs and EC officials’ attention was drawn to the existing database of attacks against journalists www.safejournalists.net,  while the same tool was assessed as very useful for monitoring the situation in Region by EC. Members of the Parliament met recognized that media freedom in the WB region needs improving and journalists’ concerns must be acted upon. They expect these impressions to be part of the upcoming Reports about the progress of Western Balkans’ countries due to be published in April 2018.

The delegation’s visit to the European Parliament and European Commission was organized by the European Federation of Journalists (EFJ) and supported by European Union as a part of the project Regional Platform for advocating media freedom and journalists’ safety.

Death threats to the President of AJM Naser Selmani