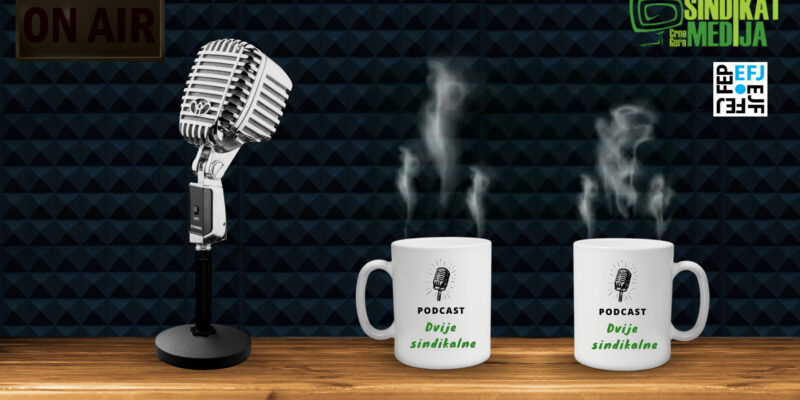 By Sindikat medija
Share
The Trade Union of Media of Montenegro has started broadcasting the podcast “Dvije sindikalne”, so in the future, we will deal with the Montenegrin media and the working conditions in them.

Bellow, you can find the link.

In the first episode we covered some of the standard problems of media employees. Vuk Vujisic, Tatjana Perovic, Boris Pejovic and Bojana Milicevic, employees in different types of media and with different views on journalism, spoke about their experiences and challenges they face, but still agree that the situation is not improving in any segment.

The president of SMCG Marijana Camović Velickovic was at the studio, who, among other things, spoke about the attitude of the state, government and line ministry, towards the media and their employees, towards the media owner and the municipality as the founder towards local public broadcasters, but also towards employees at work and according to their rights and obligations.
“The material status of employees in the media is bad and the worst in local public broadcasters, because until recently, employees at Radio Ulcinj were owed 15 salaries. The problem is the founders, the municipalities that establish the media for political influence, not caring about the financing and sustainability of those media. These are very often branches of political parties that are in power in certain municipalities, and according to the statute of those media and laws, they should be independent,” said Camovic Velickovic.
She also said that the public is persistently sent an inaccurate image that the leading domestic media are in debt, but that the story is not supported by arguments.
When asked how to force media owners to stimulate workers with higher wages if we know that employees themselves agree to work for low pay, Camovic Velickovic answered: “Montenegrin employers in the media sector usually stimulate employees with threats, and that is certainly not the way. Montenegrin journalists are no longer in the profession. “
Camovic Velickovic pointed out that 28 cases of attacks on journalists were recorded in the previous year, which is an infamous record, but also that some of those cases have already been finalized and that the perpetrators of several attacks are serving prison sentences. She also welcomed the adoption of amendments to the Criminal Code, which provides for rigorous penalties for assailants of journalists, and assessed that this is a good way for the state to improve the situation in the media.
“Passing laws and mandatory monitoring of the implementation of those laws can contribute to improving the situation. The Labor Law, which is not applied, is also very important for the media, and I think that inspection controls in the media should be strengthened, but not as a beating against certain media, but as a measure to control the application of legal obligations, “she said.
The hosts of the podcast “Dvije sindikalne” are experienced journalists Milica Mandic and Vesna Djurovic. Podcast with 10 episodes will be broadcasted once a month.
The podcast is part of the project “Union for a fair recovery – Strengthening the role of unions in mitigating the impact of the COVID-19 crisis”, which is supported by the European Federation of Journalists (EFJ) with the support of the European Commission (EC).