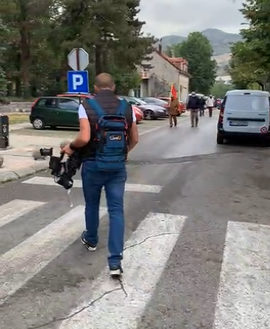 The team of N1 television was attacked in Cetinje, during the morning on Sunday, September 5 by a group of protesters who have been protesting for two days against the enthronement of Metropolitan bishop Joanikije at the Cetinje monastery.

N1 reporter Aleksandra Tolj Ruzic did a live broadcast to show the chaotic situation on the streets of Cetinje. The police constantly threw tear gas to disperse the protesters. Groups of citizens dispersed in the streets, attacked the television team for recording and threw stones at them.

The enthronement of the Metropolitan bishop of Montenegro, Joanikije, is planned for today at 8 am at the Cetinje Monastery, this has been opposed by a group of demonstrators since yesterday. They are demanding for the ceremony to be held outside of Cetinje. Patriarch Porfirije and Metropolitan bishop Joanikije arrived at the monastery by helicopter, because the city was blocked. There have been riots in Cetinje since the morning, stones are being thrown towards the police, due to which tear gas was thrown back, shots were heard, and thick smoke from burning tires on the barricades is rising.

Safejournalists Network condemns the attack on the N1 television crew, and demands from the police to find and detain those who attacked them today.

Our network has already warned that during the enthronement in Cetinje, there will be a possibility that journalists who report will be endangered. Unfortunately, everything indicates that tensions will not just subside, but our network appeals to government officials and the police to do everything in their power to prevent further violence and bloodshed.

Safejournalists Network requests from the police to protect journalists during the protest and to prevent new incidents.

We will inform all the relevant national and international stakeholders about this case.