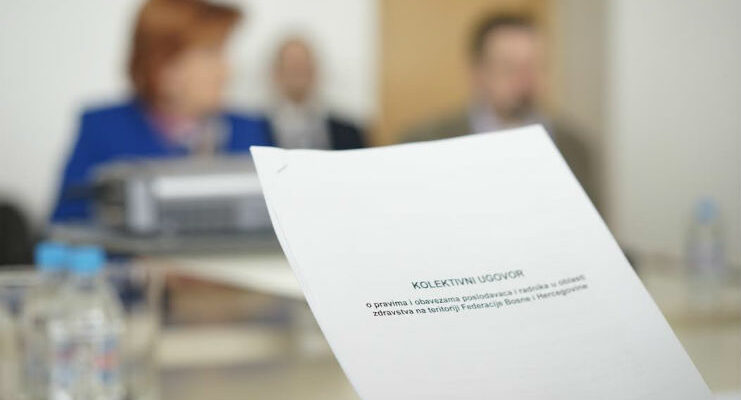 On the occasion of unilateral termination of the negotiations on the new Collective agreement for the media sector by employers, representative branch unions participating in the negotiations, Trade Union of Media of Montenegro and the Union of information, Graphic and Publishing Field issued a press release.

You can read the statement in full:

We are informing our membership, all employees in the media and the public that the Montenegrin Union of Employers, as an organization authorized to collectively negotiate on behalf of employers, has informed that media representatives have failed to agree on their views and that negotiations must be terminated. It has been almost two months since this announcement and that employers did not initiate a meeting at which negotiations would continue, we are obliged to publicly declare it.

The last meeting that discussed the Collective agreement was held in May when it was agreed that employers would inform us if they agreed with the changes proposed at the working group level. We consider it important that we inform members and the public about:

That we submitted the initiative for launching negotiations on the creation of a new Collective agreement to the Employers’ Union in September 2016; That the negotiations began after the year, in October 2017; During the negotiations we offered solutions that would improve the working conditions of the media employees; We were initially rejected on all grounds, we offered dozens of new, alternative solutions that would change the situation for the better, and that the majority were again rejected, and part was conditionally accepted and offered to individual employers for an explanation; The only proposal of employers concerned extensions of the list of serious violations of work obligations and termination of employment contracts. We are aware that the attitude of employers in the media sector is not only in Montenegro and that it is fully in line with the treatment that trade unions and employees have in all fields. This treatment is for us, who represent almost 80% of employees in the Montenegrin media, unacceptable. Especially since, in parallel with the breakdown of social dialogue, the states, which intend to be the next member of the European Union, thanks to the supposed progress in all spheres, praise the level of social dialogue in the country.

The media are those who create public opinion in every country, the bearers of all social changes, the foundation of any democracy, and media employees those who run it all and whose head is “in the bag” almost everyday. It is precisely the owners of these media who are not ready to demonstrate in practice a democracy they declare decisively and to allow to their employees a normal working conditions, or at least a hint of what is guaranteed by the Labor Law and the General Collective Agreement. The disadvantage of leading a social dialogue best illustrates the level of working conditions in the Montenegrin media, which is the profile of employers in that sector, but also the values they support.

Trade Union of Media of Montenegro and the Union of Information, Graphic and Publishing Field will inform the Presidents of Montenegro, the Government, the Parliament, the Social Council, the Minister of Labor and the OSCE Mission in Montenegro, the Delegation of the European Union to Montenegro, as well as the United States, Great Britain, the Netherlands, France, Germany and Austria Embassies.

From the Union of Employers (UPCG), we were informed that they did not receive any responses from employers in the field of media, and that “at this moment there are obviously no prerequisites for the continuation of negotiations, but that UPCG will react to the possible signal of readiness of employers from this branch of activity to continue negotiations according to the trade union information as soon as possible “. We hope that these assumptions will come at least after all relevant addresses in the country are informed about how Montenegrin employers understand social dialogue.

Union of Information, Graphic and Publishing Field, member of the Executive board, Željko Komnenović

The average salary of employees at Montenegrin portals 362 euros