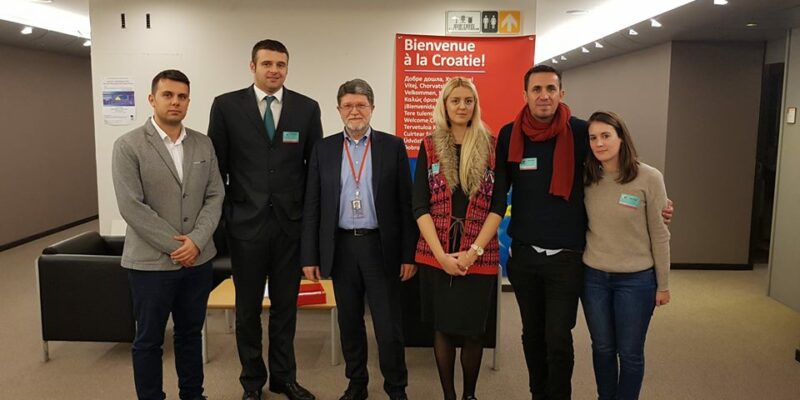 EU to put bigger focus on the economic position of journalists

When they talk about the freedom of media and safety of journalists in Montenegro and the region, european officials have to put more emphasis on improving the poor economic and social situation of media workers and issues of censorship and self-censorship, said the vice-president of the Trade Union of Media of Montenegro (SMCG) Radomir Kračković during a visit to Brussels.

Kračković presented the interlocutors the latest research of SMCG ,, Indicators of the level of media freedom and journalists’ safety in Montenegro” for 2018 in which there was no major progress in the area of ​​media freedom and safety of journalists in our country compared to the previous year. Moreover, during this period 7 attacks on journalists happened, including the most drastic attack in recent years – on journalist of ,,Vijesti” Olivera Lakić, which has not yet been solved.

Also, research of SMCG has shown once again that the salaries of journalists in Montenegro are below the national average and Kračković asked to put this problem on the agenda when it comes to the debate on the state of media freedom. Kračković also pointed out a major problem in some local public broadcasters in Montenegro, where for years a large number of employees owed wages. Vice-president of SMCG also presented the interlocutors the amendments of the Trade Union on laws on media and electronic media aimed at increasing the independence of the journalists inside their newsrooms and to establish financial sustainability and editorial independence of local public broadcasters.

The visit was organized within the project “Western Balkan’s regional platform for advocating media freedom and journalists’ safety” which is implemented by SMCG and 5 journalists associations from the region.

Summary of the findings, Indicators on the level of media freedom and journalists’ safety 2018 [MONTENEGRO]

The employers suspended negotiations on a new media Collective agreement