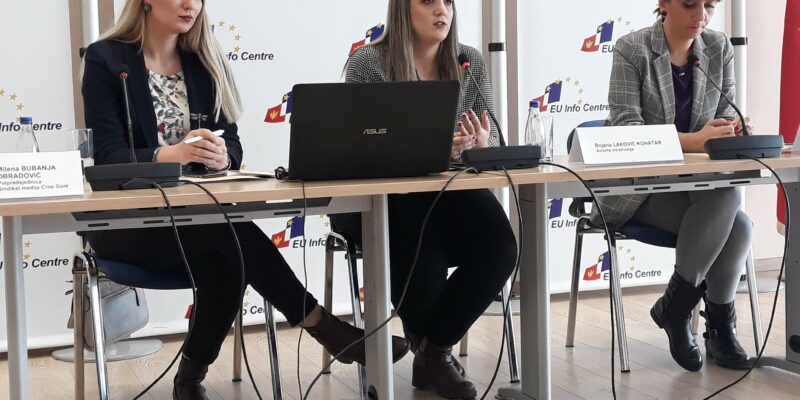 Trade Union of Media of Montenegro (SMCG) presented the first research on working conditions in digital media in Montenegro, which showed that the average salary in these media is 362 euros, which is significantly less than income in traditional media.

The research “New Media – Old Problems”, as Bojana Laković Konatar said, covered 40 media.
“We have established that there are a number of influential portals that are not registered, so they are added to the list of media to be interviewed. Thus, a total of 40 media received identical questionnaires, prepared for the needs of the project”, said Laković Konatar.
Despite the numerous reminders, only 16 media leaders answered the questionnaire. A large number of private media that have portals, which, according to SMCG information, obtained from employees in these media, have a worse economic and professional position of journalists, didn’t answer the questionnaire. Some of the leading media did not provide answers to questions.
“Representatives of the Montenegrin media often point out that they can not obtain official data from institutions and representatives of the authorities, which conceal information of public importance. However, when those same media find themselves in the situation that they need to share the information they have, they behave exactly as they call it”, said the president of SMCG, Marijana Camović. She said that SMCG’s inability to get basic information concerning the working conditions in the portals, talks about the closeness of Montenegrin media to share information that should be available.
“This also speaks about the very problematic approach of the media owners who hide information, and by the establishment of the media they have decided to earn and live from getting and disseminating information. For the SMCG this is a problem because we do not have the ability to look at the overall picture”, she said.
The research showed that there are a total of 92 employees in 16 digital media outlets in Montenegro. The majority of them are journalists, so the survey showed that there are 70 of them in the media. Less than half of the employees in digital media are those younger than 35 (31.5%). This situation can be explained by the fact that the majority of the media that participated in the survey has a different type of media (radio, television or newspaper), and that the same people work for all the editorial offices. Such is the situation in 60% of cases, where the editorial offices of several media are not separated. The research showed that in all digital media in Montenegro, a total of 83 employees, or even 90% of them, have a labor contract.
The survey also showed that the average salary at the digital media level is 362 euros. Salaries of journalists working in portals are slightly higher than the salaries of other employees, so journalists average earnings of about 370 euros a month. However, in comparison with salaries in other media (where the average salary is usually between 400-500 euros), as well as compared to the average salary at the state level (510 euros), it is clear that employees in this media are in a worse economic position.

SMCG Vice President Milena Bubanja Obradović, the editor of Radio Berane, said that there was a decentralization of the media space, so small media can be influential and this success depends exclusively on their professionalism and dedication.

“It’s a completely new field, which, in addition to a different mode of communication, entails different knowledge needed to make this communication successful. It is important to systematically deal with the situation in online media and the position that journalists have in them”, said Bubanja Obradović. She added that in the case of Radio Berane, this topic is especially important at this time when the new set of media laws is planned, and that the survey conducted by the SMCG has shown that the work in the portals is exhausting and insufficiently paid, but also unregulated for more levels.
SMCG also presents examples of good practice and creative approach to the journalist, and discussed with Milena Bubanja Obradović, as well as journalist Darko Bulatović, who is the pioneer of mobile journalism in Montenegro and the young and award-winning journalist of the Fos Media portal, Danilo Ajković.
The report “New Media – Old Problems” presents the findings of the research conducted within the project “Union to Union – Digital media organizing campaign”. The project has been implemented for the fourth consecutive year with the help of the International Federation of Journalists (IFJ) and the Swedish Journalists’ Union.

The employers suspended negotiations on a new media Collective agreement