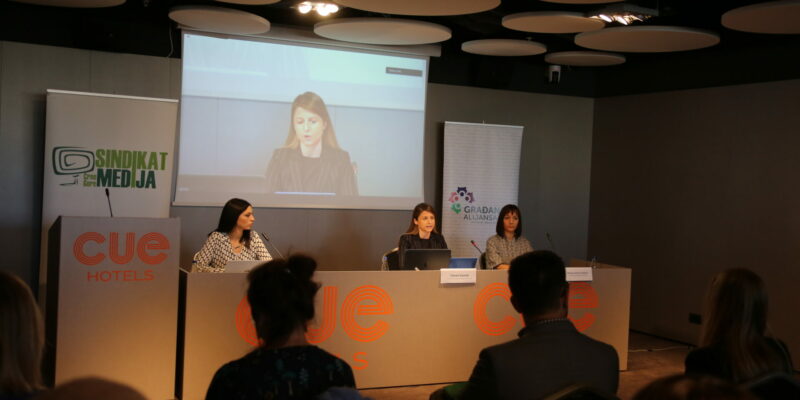 The strong commitment of governments is crucial to protect and promote a free and secure environment for journalists and the media, it was said during the first day of a conference organized by Trade Union of Media of Montenegro (SMCG) and the Civic Alliance (GA).

The Minister of Public Administration, Digital Society and Media, Tamara Srzentic, said at the conference “Days of Media Freedom in Montenegro” that a year ago, when she took office, she found the media scene facing many shortcomings and a whole range of open issues, stating that control and political pressure are inherited problems, as stated in the European Union Report.

“Reading the main findings of the research you present today, we see that, unfortunately, journalists often work in difficult conditions, exposed to financial and political pressures. They are often not paid overtime, nor are they paid on weekends. Lawsuits for damages to journalists and the media are still frequent. We are witnessing attacks on journalists, and hate speech is growing, especially on the Internet,” Srzentic said.

She reminded that the Ministry had set ambitious goals: to legally regulate and improve the media sector in an appropriate way, to ensure the safety of journalists and thus bring the media to a level similar to that achieved in some EU member states.

“The media strategy we are preparing in cooperation with the media community and the civil sector will enable a broad and inclusive dialogue and contribute to the regulation of the media sphere in accordance with the highest international and European standards,” Srzentic pointed out.

According to her, as guardians of democratic values, the media have an important role in raising public awareness of the importance of protecting vulnerable groups and breaking down prejudices and stereotypes.

She said that journalism should never serve the centers of political, economic or any other power, because its exclusive goal, as she pointed out, is to fight for the interests of all citizens and their right to be objectively, balanced and truthfully informed.

The OSCE Representative on Freedom of the Media, Teresa Ribeiro, said that during her tenure she faced a rapid loss of public trust in the media and growing discontent with the media, saying it was caused by populism of politicians and authorities and worsened by misinformation.

“I appeal to politicians and public officials to refrain from harmful rhetoric and to enable an environment in which freedom of expression will flourish. This negative development has significantly affected the safety and working conditions of journalists,” Ribeiro pointed out.

He believes that legal maltreatment poses a serious threat to the safety of journalists.

“Law enforcement has an important role to play in protecting the work of journalists at events of public importance. Appropriate operational safeguards need to be put in place, such as a special police team to protect media workers as they report from public events in order to fulfill their democratic function in society,” Ribeiro said.

She said strong government commitment is crucial to protecting and promoting a free and secure environment for journalists and the media.

President of the Trade Union of Media of Montenegro, Marijana Camovic Veličkovic, reminded that the organization has been monitoring the situation in the media in Montenegro since its establishment and that is trying to improve it.

“If employees in the media are underpaid or censored or self-censored, we will talk in vain about high standards in journalism. If we have laws that do not support media freedom and do not encourage journalists, as well as other employees to feel free and protected on the street and in the workplace from attackers and employers, we do not have free media,” said Camovic Velickovic.

She said that in the past period, they analyzed the situation in the media and gave recommendations for creating a safe, secure and professional environment for journalists and other employees in the media.

“When it comes to mapping media legislation, the last year was marked by serious and extensive work on the analysis of media legislation and identifying the main shortcomings. We analyzed the Law on Media, the Law on National Public Broadcaster of Radio Television of Montenegro, the Draft Law on Audiovisual Media Services, the Law on Free Access to Information, the Criminal Code, the Law on Copyright and Related Rights, as well as other close bylaws, “she said.

According to her, SMCG realized 21 advocacy activities during the year, which resulted in 49 proposals for changing media laws and bylaws.

“Through the monitoring of court proceedings, it was determined that during the last two years, 42 cases of attacks and incidents and threats to journalists and other media workers have been identified. Of the 25 reported cases, incidents and attacks on journalists this year, 20 were reported to the police or the police acted ex officio, and ten received a court epilogue. Convictions have been handed down in four cases, “said Camovic Velickovic.

During the panel “Socio-economic position of media employees”, SMCG researcher Bojana Konatar, presenting the research conducted by SMCG from October to December this year in the form of an online survey, said that the survey was sent to more than 200 addresses and received responses from 87 journalists and editors.

“When it comes to the economic and social position of journalists, the research showed that the respondents are mostly university educated (84 percent), but only 32 percent of them pointed out that these are faculties related to journalism and media. As many as 63 percent of respondents have been in this business for more than ten years, 75 percent of them work for only one newsroom, slightly more than 18 percent work for two newsrooms, and six percent for more than two newsrooms, “said Konatar.

The research, as she pointed out, showed that the average day of journalists, for more than a third of employees, lasts longer than eight hours. On the other hand, about 23 percent of respondents work eight hours a day, and slightly more than 12 percent of them work six hours a day.

“As many as 79 percent of journalists work overtime, of which 37 percent often, and 41 percent of them said that they sometimes worked that way. However, the fact that as many as 69 percent of them have never received compensation for overtime work speaks of their position in the newsrooms, “said Konatar.

She pointed out that 38 percent of journalists earn less than the average – 500 euros.

“30 percent of respondents have a salary higher than 600 euros, and every fourth journalist in Montenegro receives between 500 and 600 euros net, and it can be said that he earns at the level of the average in the country,” said Konatar.

The interviewed journalists said that they have great freedom in their work, but as many as 45% of them used to censor content.

Speaking about the position of journalists in local media, the representative of Radio Berane Milena Bubanja Obradovic, said that the problems faced by employees in local media are large and easily noticeable, stating that they are reflected in other employees in the media in Montenegro.

According to her, in richer municipalities, the situation in the local media is at a better level, stating that seven local broadcasters operated negatively and have very large tax debts.

Speaking about the business of the media during 2020, the representative of SMCG Predrag Nikolic, said that in Montenegro there is a large number of media in the small market, stating that out of 189 media last year, only 70 operated positively, 14 were at zero, while 68 operated negatively, and 34 did not receive data.

“The biggest plus was Radio Television of Montenegro, because 90 percent of the income comes from the state budget. The daily and weekly press still have the highest income among private media, while private television, despite the trends of improvement, still operates in the red. “There are a large number of radio stations, with a small number of employees, which operate positively,” said Nikolic.

He added that close to half of the media revenue came from public sources, the rest mostly from marketing.

During the panel “Ethical reporting of the media on vulnerable groups”, the researcher of the NGO Civic Alliance, Mehdina Kasic Sutkovic, said that the organization followed the texts related to vulnerable groups, which include migrants, women, people with disabilities, LGBTIQ. Roma and other minority nations.

“In the period from January 18 to November 17 this year, the Civic Alliance monitored 11 portals, of which five were national and six regional. In the mentioned period, the monitoring included and analyzed 1,108 texts that treated members of vulnerable groups in their content or comments, “said Kasic Sutkovic.

According to her, the analysis found that the media in a small number of cases report on vulnerable groups, and the recommendation of the GA is that the media have a more proactive approach.

“The analysis showed that members of certain vulnerable groups are treated more in the media when there is an important date for those groups,” said Kasic Sutkovic.

The representative of the LGBT Forum Progres, Bojana Jokic, assessed that there is progress when it comes to media coverage of the LGBTIQ population.

“There are a large number of articles that treat LGBTIQ issues as they should and it is much less common to use inadequate terminology,” Jokic pointed out. She added that the media should remove offensive comments on social networks, which refer to the LGBTIQ community.

The representative of the Association of Paraplegics of Podgorica, Dejan Basanovic, believes that progress is evident when it comes to media coverage of PWD, stating that the biggest problem with reporting occurred in terminology.

“Previously, PWD was reported through a medical or functional model. I insist that we should deal with the human rights model, that is, look at a person with a disability as a person,” Basanovic pointed out.

He assessed that it is necessary to standardize the terminology, and that it would be good to establish greater cooperation with the media.

The representative of the NGO Step with Us – Phiren Amenca, Andrija Djukanovic, said that media coverage of Roma has recently improved in terms of quality and quantity, but that there are elements that should be still improved.

“The volume of reporting on Roma is greatest in the months and days when important dates in the history or culture of the Roma population are marked, such as April 8 or November 5. Media reporting refers to the monitoring and reporting of planned events, such as round tables, conferences, humanitarian actions,” said Djukanovic.

He said there was little media initiative to report on Roma inclusion in Montenegro.