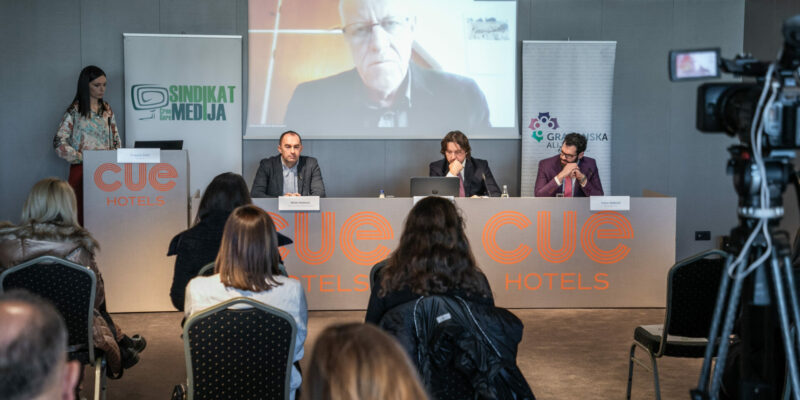 In Montenegro, from January to the end of November, according to the records of the Trade Union of Media of Montenegro (SMCG), 25 attacks on journalists were registered, which is an increase compared to last year, so the state should create a national action plan for journalist safety.

This was announced during the second day of the conference “Days of Media Freedom in Montenegro”, organized by the SMCG and the Civic Alliance (GA).

The Minister of Internal Affairs, Sergej Sekulovic, said that Montenegro does not have much reason to brag when it comes to the safety of media workers.

“We bear the burden of certain old cases that have remained unresolved, and until we remove that burden, it is difficult for us to make a decisive and real step forward in the area of ​​freedom of expression and in the context of European integration,” said Sekulovic.

He assessed that the Commission for the Investigation of Attacks on Journalists is functioning better than in the previous period.

“Apart from the fact that there were many attacks and threats to security, 23 in the previous year, all but one were clarified, some were qualified as criminal acts, some as misdemeanors, some documents were submitted to the prosecutor for decision. I think that we have shown considerable diligence so far“, said Sekulovic.

According to him, they recognized the importance of strengthening the units dealing with this issue, stating that at the moment there is a chief police inspector at the level of the Administration who coordinates the system, two inspectors at the level of security centers working regionally in coordination with him.

The Minister expects that the systematization will be sent to the Government soon.

Sekulovic believes that if the detection and prosecution authorities do their part of the work efficiently, it will certainly have a preventive effect on potential attacks and threats and will suppress them.

The basic state prosecutor, Vukas Radonjic, said that they use the cases of attacks on journalists and media workers in the Prosecutor’s Office as a warning and a lesson.

„I have to call on all journalists to contact the State Prosecutor’s Office at all times, in any situation, either due to official obligations or journalistic tasks, or because you feel threatened and hindered in doing your job. Through filing criminal charges, but through direct communication with me, because I believe that we are all on the same task and that we will all together achieve mutual and direct communication, mutual cooperation and understanding, we will succeed in achieving certain results,” said Radonjic.

The President of the European Federation of Journalists, Mogens Blicher Bjerregard, believes that a national action plan for the safety of journalists and the issue of impunity should be created in Montenegro.

“When you have a national action plan that includes that the authorities should take responsibility as we could hear from the prosecutor and the minister, there is a responsibility to protect journalists that should be taken because the safety of journalists is a struggle for democracy,” Bjerregard said.

According to him, it is necessary to ensure that political leaders and politicians in the Government and the state unconditionally support media freedoms.

“Politicians should not teach us codes of ethics and obligations. We need politicians to protect journalists and journalism, and we will take care of our profession, education and ethical standards,” Bjerregard said.

The program director of the GA, Milan Radovic, said that the organization monitored the cases registered in this and the previous year from January to the end of November this year.

He pointed out that the trends of attacks on journalists continue, in some areas there has been an increase in the number of attacks, and the sanctions imposed in these proceedings are extremely low and do not deter attackers and perpetrators from attacking journalists.

He pointed out that during the monitoring, they saw two new trends, stating that there are more and more threats through social networks.

“Prosecutors have mostly told us that they have never participated in trainings for investigating attacks on journalists, but they have expressed their readiness to join training programs and believe that these programs should be systematically set up and regular,” Radovic said.

Speaking about the attacks by the end of November this year, Radovic stated that they registered 25 attacks, explaining that this is an increase compared to last year when they registered 17.

Speaking about the processing of cases, Radovic said that 20 were reported to the police, out of 25, or the police acted ex officio. Ten of them have received a court epilogue, four cases have been completed so far, which have convictions, but the sentences range from a suspended sentence to a ten-month sentence and a restraining order.

The executive director of the Action for Human Rights, Tea Gorjanc Prelevic, said that conducting effective investigations into attacks on journalists should be a priority.

“We believe that it is very important that the Parliament of Montenegro ascertains the situation as it is – that the number of attacks is increasing and that it must act additionally for the purpose of prevention,” said Gorjanc Prelevic.

She assessed that the protection of journalists’ safety must not be connected in any way with what they write.

“If they write well, if they write badly, that is irrelevant. And a journalist who writes lies should be safe, “said Gorjanc Prelevic.

She reminded that nine NGOs initiated amendments to the Criminal Code, in order to toughen penalties for attacks on media workers, and called on representatives of parties and the civil sector to get involved in the public debate on that topic.

The representative of the SMCG, Drazen Djuraskovic, said that initiating proceedings against parts and reputations, regardless of the final court epilogue, represents pressure and influences journalists by causing self-censorship.

“On the other hand, while there were 54 cases in the courts due to damage to parts and reputations of all existing self-regulatory mechanisms, 29 complaints were registered. These data indicate the need to create more serious self-regulation, primarily by all media operating in the media system, and this would indirectly strengthen public confidence in its mechanisms,” said Djuraskovic.

The president of the SMCG, Marijana Camovic Velickovic, reminded that the organization advocated the development of a media strategy even before the then Prime Minister announced it in 2016.

“We dealt with the Law on Media. Although the Law was innovated and adopted in August 2020, we believe that it is still not good and that it should be changed in several segments and that much can be done to improve working conditions in the media, especially in terms of reducing censorship and self-censorship. stated Camovic Velickovic, reminding that they had 15 amendments to that law.

She said that she would seek and insist on further strengthening the autonomy of media workers, introducing order in the process of media records and envisaging clear deadlines for that procedure.

“We had 11 suggestions on the proposal of the Law on Audio-Visual Media Services, reminding that this act has been under various reviews for two years, and that SMCG has supported the principles that guarantee sustainability to local public broadcasters,” said Camovic Velickovic.

She announced that SMCG will re-initiate negotiations on a new branch collective agreement for the media, stating that it is necessary to bring order to the work of the media and employees.

The representative of the Montenegro Media Institute, Olivera Nikolic, assessed that there was no designed, strategic approach to solving problems in the media and the media community in Montenegro.

“Mostly it was done ad hoc, in accordance with the particular interests of political or media actors or with the ‘pushing’ of the international community that some standard should be met. At the initiative of several NGOs, a proposal was included to work on a systematic approach to media policies, “said Nikolic.

She pointed out that in the Working Group for drafting a media strategy, out of 20 members, there are no media representatives, except for the Public Service.

In my opinion, that is not good, because it is an opportunity to open a conversation about what we think are the key problems and to think carefully through the broadest social dialogue and inclusion of various actors what we can map as a realistic solution that we can implement in practice to improve working conditions. let’s save what can be saved “, said Nikolic.

Acting Director of the Media Directorate at the Ministry of Public Administration, Digital Society and Media, Nedjeljko Rudovic, said they were currently working on a second draft media strategy after two months of work.

The key area is attacks on journalists and threats to journalists, because here we are trying to define operational measures and activities that would aim to reduce the scope of attacks, threats, harassment to zero, if possible, or to the extent of reason, and I think that it is also possible“, Rudovic pointed out.