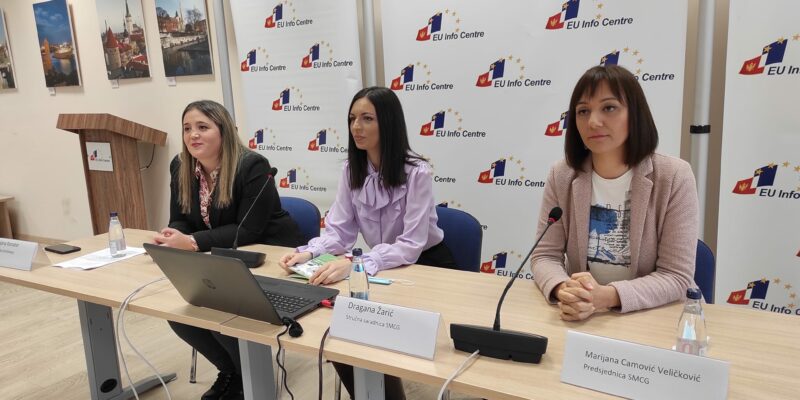 Unregulated registration of the portals, pressure on employees, unpaid work, poor position of freelancers, and lack of data on financial operations, are the problems that marked this year in the digital media. This is shown by the results of the research “New Media – Old Problems 2021”, which was presented today by the Trade Union of Media of Montenegro (SMCG). The President of the SMCG, Marijana Camovic Velickovic, presented diplomas to 14 students of the first School of Trade Unionism and Digital Media.

Asanin, Cvorovic and Ceklic were awarded for the best works created during the online lectures at the School of Digital Unionism.

The mentor in the School, Dragana Zaric, assessed that the participants increased the level of information on trade union topics and digital media.

“The works that were created during the duration of the School show that this educational idea is justified. The level of information of the participants on trade union topics is higher and we hope that they will use their knowledge in future jobs, “said Zaric.

Researcher Bojana Lakovic Konatar assessed that this year’s research on digital media did not show positive changes, compared to the previous four years since it was conducted.

“Employees in the media continue to work in equally poor conditions, undeclared work is present, wages are still below average, pressures are obvious, and overtime and unpaid work are almost constant. Digital media in Montenegro also gathers the largest number of freelancers, who are forced to work for more media in order to provide themselves with a decent income. The freelance journalistic community in Montenegro is currently strong, with a large number of mostly young people gaining experience in the media in this way. However, the legal regulations are still not favorable to them and they are mentioned in only one law “, stated Lakovic Konatar.

She pointed out that the SMCG research contains a number of recommendations aimed at improving the position of employees in digital media.

“The state must pass bylaws that would more closely regulate the registration procedure of the portals. It is necessary to legally protect freelancers, which will be more numerous in the coming years. The state, media owners and employees in the portals must recognize and react in time to the challenges posed by the digitalization of jobs and the digital economy “, concluded Lakovic Konatar.

The SMCG says that it will follow the changes on the media scenes in the region and the world, in order to be ready to face the challenge of digitalization of jobs and provide adequate assistance to its membership.

The SMCG report is part of the project “Union to Union – Recruitment and Organizing Campaign in CEE 2021”, which is implemented with the support of the International Federation of Journalists (IFJ), Union to Union and the Swedish Journalists’ Union.