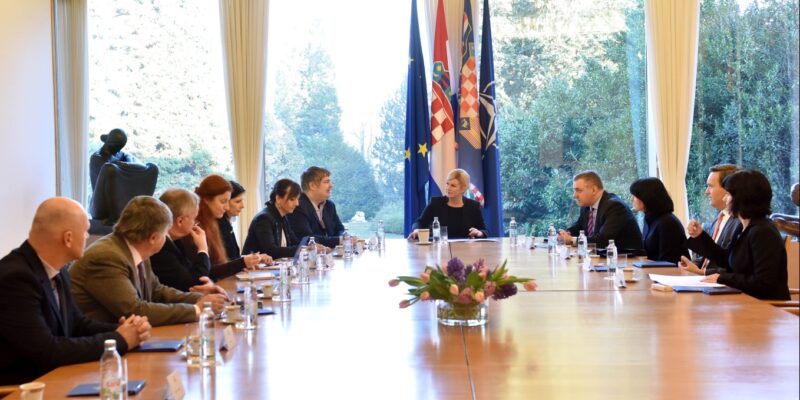 On January 15 and 16, 2018, an international delegation of press freedom organisation representatives visited Zagreb to observe the state of media freedom in Croatia. This was the second such visit in two years.

After the fact-finding mission in June 2016 produced particularly bad results, the representatives of the South East Europe Media Organization (SEEMO), the Association of European Journalists (AEJ), the European Broadcasting Union (EBU), the European Centre for Press and Media Freedom (ECPMF), the European Federation of Journalists (EFJ) and Reporters without Borders (RSF) did find a slightly more positive situation at the beginning of 2018.

First of all, the new conservative–liberal (HDZ–HNS) coalition at least has media freedom as a matter of the utmost importance for a member state of the European Union on its agenda. However, “it still has a long way to go“, says Oliver Vujovic of SEEMO.

Pauline Adès-Mével of RSF stressed that it’s not a good sign if a delegation visits a member country of the European Union twice in two years.

“Now ranked 74th in RSF’s World Press Freedom Index, Croatia has fallen steadily in the index since joining the European Union in 2013, by a total of ten places in less than five years. It must be hoped that Croatia will not take the same road as Bulgaria, which began falling as soon as it joined the EU in 2007 and now has the worst ranking of any EU member.”

In meetings with the President of Croatia Kolinda Grabar-Kitarović, the Minister of Culture of Croatia Nina Obuljen Koržinek, trade unions, journalists’ associations and professional organisations, journalists, media authorities and ambassadors the criticisms were:

“Various sources claim that biased reporting and internal governance of the public service HRT haven’t really changed since 2016. We did identify several problems and unresolved questions. Due to illnesses in both the HRT management and one of the relevant journalists’ associations, the delegation could not check these concerns on the spot. But there are some encouraging signs, too. By all means, HRT is not only under political pressure, but also under attack by different interest groups demanding to interfere in editorial and management decisions.”

Boris Bergant of EBU stressed that this shows “a fundamental misunderstanding of the role and function of public service media in the society.” The Minister of Culture promised to improve the legislation.

The destructive influence of hate speech on society has actually increased. Even though there are no extremist parties in the parliament, the public space seems to be poisoned by daily verbal attacks, including on journalists.

“We were quite astonished to find that the Agency for Electronic Media considered all 30 of the  hate speech complaints in 2017 as not being hate speech. In 2016 there was one single case that was recognised as such. Croatia desperately needs to deal with hate speech”, says Sophie Albers Ben Chamo of the ECPMF. The delegation urged the President of Croatia Kolinda Grabar-Kitarović to use her position to speak out decisively against incitement and threats of all kinds.

The delegation praised the work of the Croatian police, as they have recently arrested more persons who physically attacked journalists, compared to the past. However physical attacks, threats and especially online threats against journalists are still a big problem.

Still there is no media strategy. The Minister of Culture Nina Obuljen Koržinek announced that her ministry is taking care of the law on media as well as the law on electronic media. Nevertheless, the results won’t be seen for another year.

Part of this strategy should also include the support of non-profit media whose state subsidies were completely cut off by the former government. Their situation hasn’t changed since then.

Also an issue that needs to be examined is media ownership.

“In many cases media ownership is not transparent. One prominent person, not active in media business owns a series of media. A foreign group with unknown owners controls a few regional and local media”, says Otmar Lahodynsky of AEJ.

“Trade unionists are discriminated and dismissed, collective agreements exist only in few media, and they aren’t negotiated collectively. Journalists are forced not to write about some topics, and there are no trade union organizations in numerous private media”, says Marijana Camovic of EFJ.

The preparation and the swift implementation of this visit must be credited to the support of the local partner of the European Federation of Journalists, the Croatian Journalists Assocation (HND).

The delegation will issue a detailed report by the end of February 2018.

Ensure the independence of journalists from managers and media owners

On the occasion of the Day of Journalists, MPs were presented amendments to media laws