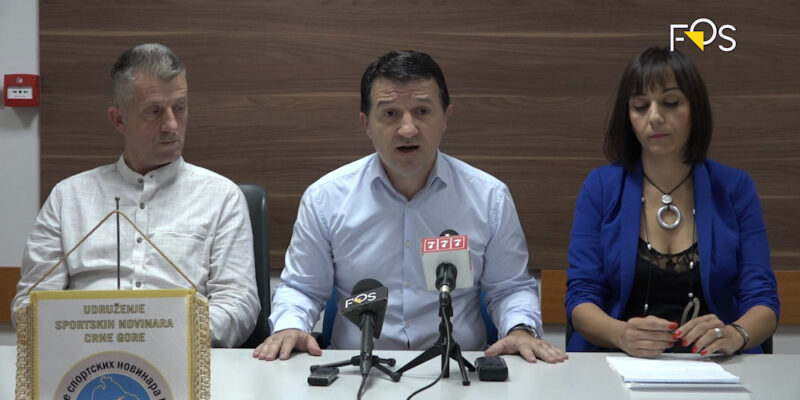 Nova M needs to prove that Ćulafić is negligent

Trade Union of Media of Montenegro (SMCG) supported the reporter of the newly opened Television Nova M Igor Ćulafić, who was suspended three days ago due to “negligence and misconduct toward work obligations”.

SMCG president Marijana Camovic said at a yesterday’s press conference, organized by Ćulafić, that the suspension was done in a problematic manner on a paper that does not have a seal stamp so that it is not known under what number and whether the document is misled. According to her, on this document, only the members of the Labor Act law were listed on the basis of which violation he was suspended.

“They are referring to the Statute, whose contents Igor is not even familiar with. I’m glad that the decision was written in this way, superficially and sluggish, because I believe that even in the disciplinary post, which I expect to be running soon, they will not be able to prove that it is negligent and that it did not deal conscientiously with the work obligations. Igor’s behavior was the exact opposite, and he was prevented from doing it, “said Camovic.

On the eve of the TV transmission of the fourth round of the League of Nations between Lithuania and Montenegro, it is announced that the commentator will be the journalist of the Public Media Service Maksim Zivaljevic, and the police also had a job to do, because the director Ivana Sebek called because of the alleged threats. “There is only one truth. Between 18: 25h and 18: 40h, after the central log in at which I announced that I will be commenting transmition of the game from Nova M, the invitation to the Police of Podgorica was sent. Why did I say I would comment the match? Because I am the only employee in the TV Nova Nova M sports room. Informed by colleagues from the technical service that the studio was equipped for the first time since the beginning of the year, I expected to transfer and got prepare for it. I did not hurt any discipline or journalistic code. I have not been informed that I have been banned from transferring matches of the Montenegrin national team. If so, I would retire and I would not make a problem because of engaging colleagues from other media houses. On the contrary, and then I am also looking forward to engaging Maksim Zivaljevic”, Ćulafić said at the conference.

He said that the police were correct with him, that he was waiting to make a statement in their premises, but that Šebek did not submit the application 47 hours later.

“If I behaved violently, if I threatened, why there is no application?”, he said. Ćulafić invites Interior Minister Mevludin Nuhodžić and Director of the Police Directorate Veselin Veljović to publish a recording of the telephone conversation of the executive director and TV director of Nova M Ivana Šebek with the duty station of the Police Podgorica, after which the patrol was activated. After the incident on Sunday, the TV Nova M informed that Ćulafić was banned from entering the TV premises.

Support of Ćulafić was given by the Association of Sports Journalists of Montenegro.

“The situation is inappropriate and unrecognized in sports journalism in Montenegro. We will not deal with the editorial policy of the media, but we will do it in the most efficient way, as far as it is in our power, and it is, act to protect our members. We are worried about the Culafić case, and we will inform the Association of Sports Journalists of Europe and the World Organization of Sports Journalists. I believe that we will get the support, as far as our honorary colleague is concerned”, said Association President Veselin Drljević.

Nova M opened a few days ago, after the United Media Media Group took over Pink M. Camovic said that the Montenegrin public had great expectations of this change, but United group representatives immediately did something that has not been done so far in Montenegro – police to take away employees from the editorial staff.