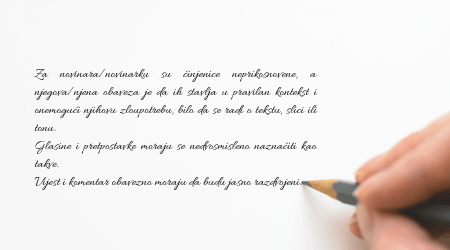 Montenegrin Code of journalists states that the media must act in good faith, even when they are strongly criticized, unsuspecting personal attacks cannot be protected by the right to freedom of expression. Freedom of expression in the media provides a wide space for free action and information for citizens, as long as they respect journalistic ethics and the rights they have been granted treating responsibly. The problem arises when a journalist, as an individual, editorial board or other person deviates from ethics and the public interest for material gain, or for some other reason. Where is the limit to which journalists are allowed to go when talking about individuals, even those working as public officials, in such a way that they question their reputation and honor?

Was Montenegrin society prepared to decriminalize insults and defamation and would their reintroduction into the Criminal Code endanger media freedoms?

In practice, the media can use the right to freedom of expression as an excuse to threaten the rights of the individual, damaging their reputation. Thus, they draw the attention of the public to their work, leading to personal quarrels, political or other disputes with people who don’t think the same as they do. It is similar beyond the borders of our country, as exemplified by the case law of the European Court of Human Rights.

The issue of the balance between freedom of expression and libel and defamation has been repeatedly raised in front of the European Court of Human Rights. Thus, in the case of Krutil v. Germany, the court concluded that the right to freedom of expression of the journalist had not been violated, when he publicly compared his colleague with Goebbels, the minister of propaganda in Nazi Germany. The Court considered that in this way the journalist had damaged the reputation of his colleague, which exceeded the limit of acceptable criticism.

The European Court of Justice has done the same in the cases of Perna v. Italy, Łozowska v. Poland, Kinces v. Hungary, without giving priority to freedom of expression at all costs.

Endangered personal rights can be accompanied by compensation for non-pecuniary damage, which may not be a significant barrier for some media. If we consider journalism as a business (from the perspective of media owners), financially stable media can channel some cash to compensate the harm they do to certain individuals, if that story brings them (by their standards) sufficient publicity and money. The amount of the fine and damages for the violation of honor and reputation should be commensurate with the gravity of the infringed right. In the case law of the European Court of Justice, there have also been cases where the amount of compensation for non-pecuniary damage has led to a violation of the right to freedom of expression. Thus, in the case of Filipović v. Serbia, the applicant had to pay a fine equal to his total income for six months, and in the case of Koprivica v. Montenegro, the penalty was 25 times higher than his monthly income. The Court concluded that this was a violation of the right to freedom of expression.

From a journalistic point of view, it is not difficult to determine where the line between sharp criticism and blatant insult is, but it is often the presence of editorial influence on the words behind the journalist as the author of the text. Are editors the ones encouraging disrespect for the line between reputation infringement and freedom of expression? Is taking the word out of context for greater circulation justified? Can a violation of this article of the Code be one of a series of “business games” by media outlets?

It is necessary to work on professional and ethical media standards. It is necessary to insist on compliance with the Code of Ethics and its unconditional implementation. Through the process of self-regulation, the media should correct their shortcomings and create conditions where freedom of expression will be considered a priority, but respecting their obligations, counteracting the abuse of power of public speech. They don’t currently do that.

POSSIBLE PROBLEMS DUE TO DEBT FOR TAXES AND CONTRIBUTIONS