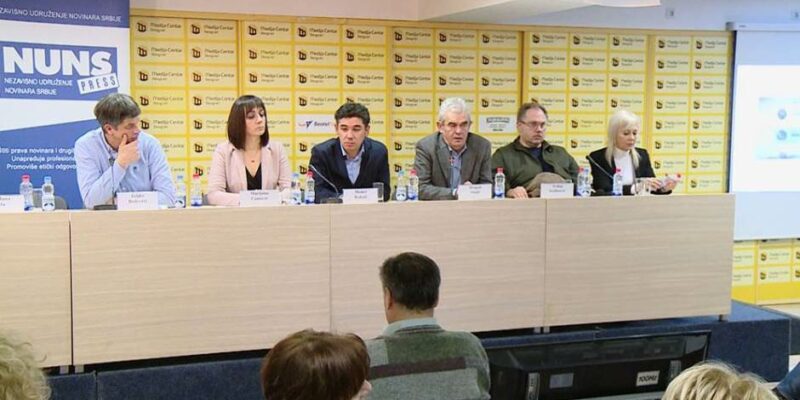 SMCG condemned attacks on journalists in Serbia and supported NUNS

Representative of the European Federation of Journalists (EFJ) Mehmet Koksal today condemned the threats received by journalists in Serbia and announced that he would ask the authorities in Serbia to report on the status of all cases of attacks.

At a meeting in Belgrade, Koksal estimated that the state should answer the question why it still, through public money, finances media that spread the hate speech.

He said that the EFJ had previously responded to the case of Milan Jovanovic and that they were “in shock at the pictures of a burned house”.

The president of the Trade Union of Media of Montenegro, Marijana Camovic, condemned the attacks on journalists in Serbia and said that the Western Balkans Regional Platform for Advocating for Media Freedom and Journalist’s Safety has reacted 15 times in Serbia so far, and that the network reacts only in the most drastic cases.

“I think it’s unacceptable that threats on social networks have not gone ex officio,” Camovic said, adding that the number of attacks on journalists was thus being considered.

She noted that a new trend was observed in Serbia, which is “an increase in various pressures, labeling, discrimination, non-recalling events”.

The vice-president of the Independent Journalists Association of Serbia, Dragan Janjic, invited government officials to stop attacking media that critically report on society and added that the public is the only protection for journalists.

Regarding the threat he received on the Facebook page “Serbia OUR COUNTRY”, Janjić, who is the editor-in-chief of the Beta news agency, said his specific request was to discover “who are the people behind this page” and added that already called by the Prosecution to investigate.

He noted that it is important what kind of message is being sent by representatives of the authorities and urged them to stop attacks on media that critically report on society.

Janjic recalled that from that same site at this time last year it was written that he “should be taken to Kalemegdan and shot”.

The journalist Gordana Suša, on the occasion of the insult and accusation sent to her by editor-in-chief, TV Happy Milomir Maric, said she is going to file a lawsuit against Maric and that television.

She said that all domestic and international organizations report that the number of attacks and threats to journalists has steadily increased.

Nedim Sejdinovic, the president of the Independent Association of Journalists of Vojvodina, said that “an organized campaign against him often occurred during the period when the protests took place”. Previously that occuret during the “Protests against dictatorship” and in current months durign the protests “One in five million”.

N1 television journalist Vojislav Stevanovic said that this TV had previously received threats and that they understood everything seriously.

Speaking of the latest threats, he said the police reacted, but that they were “consequences, not a cause”.

A meeting in Belgrade was attended by citizen protector Zoran Pasalic and a delegation from the European Federation of Journalists.

Every fifth journalist is not free to join the union, every third receive less than 400 euros

Representatives of 14 organisations signed Charter on Working Conditions for Journalists