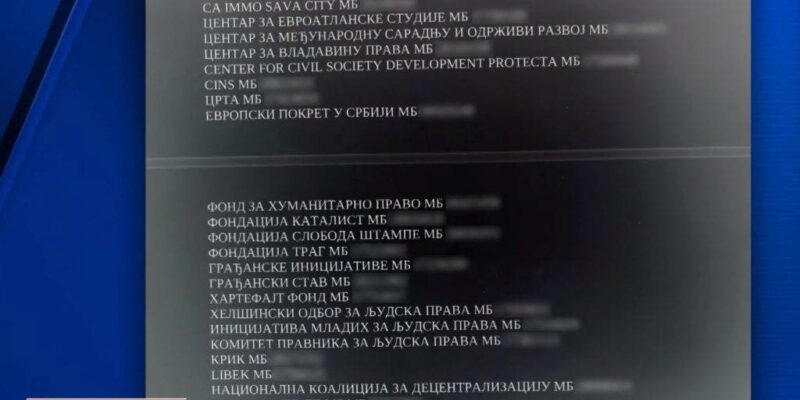 The mentioned institution which is Serbian equivalent to a Financial Intelligence Unit-FUI has drawn up a list of media, journalists, and CSOs and sent an official request on July 13th, 2020 to all commercial banks in Serbia to provide information and documentation related to all Serbian dinar and foreign currency accounts and transactions of those entities from the list. The information about this list was published in the Serbian media on Monday evening and the list is consisting of 20 individuals and 37 media and CSOs. On the list are six journalists and 10 media and journalists’ organizations whose work is based on protection of public interest in public information and one of them is our partner organization Independent Journalists’ Association of Serbia (IJAS).

The Serbian authorities with this kind of public listing of critical civil organizations and individuals are also harming the presumption of innocence, which is a human right guaranteed in the European Convention for Human Rights since the pro-government media are triggered to label them as criminals in the public discourse.

-We interpret this move of public authorities as a serious pressure on freedom of expression and another attempt to discredit professional journalists and journalists’ organizations, media and other CSOs, said Zeljko Bodrozic, president of IJAS and added – We have nothing against any controls, our work is otherwise subject to various types of internal and external audits, but we ask the competent institution to inform us on which basis everyone from the list are suspects, ie which indicators and risks support the grounds for suspicion of initiating a control procedure by the Administration for the Prevention of Money Laundering. We remind that this is an institution that deals with investigations related to the prevention of money laundering and terrorist financing. –

The SafeJournalists Network, representing more than 8,200 media professionals in the Western Balkans, supports its member IJAS and recalls that such a move is reminiscent of some moves by authorities in countries with authoritarian regimes that use government mechanisms to deal with people who think differently. For this reason, we believe that it is necessary for the competent authorities to explain as soon as possible how they came to this list of people and organizations and what qualified them to be on such a list.

SafeJournalists: We stand by our Belarus colleagues

Attack on a journalist during the “patriotic” rally in Bijelo Polje

Since its establishment, KRIK has constantly been under attack by the pro-government media Crime and ...
By Sindikat medija
22/03/2021

Masked men broke the teeth of a journalist from Pristina