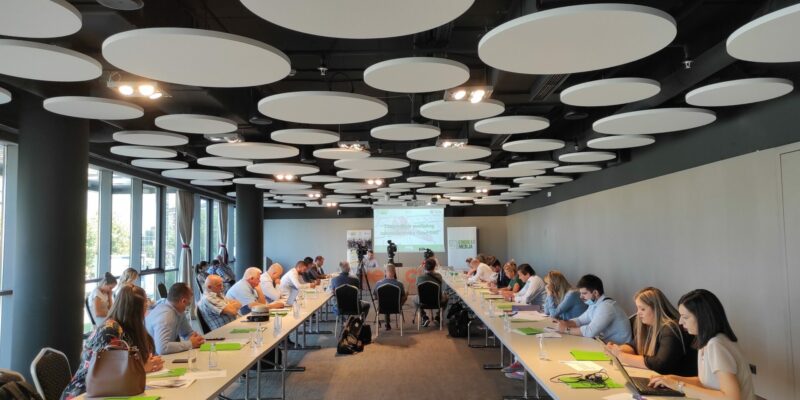 Political parties in principle support the amendments to the Criminal Code requested by NGOs and media associations, in order to toughen penalties for attacks on journalists, it was announced at the third round table “Improvement of media legislation in Montenegro”, organized today by the Trade Union of Media of Montenegro (SMCG). Media community must find a common language and act more harmoniously, agreed the deputies of the Parliament of Montenegro, representatives of political parties, international organizations, media associations and NGOs, who attended the round table.

SMCG presented recommendations for the improvement of the Law on Media, the Law on National Public Broadcaster, the Law on Electronic Media (Draft Law on Audio-Visual Media Services), the Law on Free Access to Information, the Law on Copyright and Related Rights, and the Criminal Code.

The vice president of SMCG, Radomir Krackovic, reminded that for a long time there was no response to the requests of the civil sector and media associations to toughen the penalties for attacks on journalists, and thanked the deputies for expressing their readiness to change that.

He said that the expectation of SMCG is that the Law on Audio-Visual Media Services, if adopted in the form of the existing Draft, will help local public broadcasters, because the budgets of these media would increase. “We invite you to pay attention to this law, when it comes to the parliamentary procedure,” Krackovic told the deputies.

MP Marko Milacic commented on the proposed amendments to the Criminal Code, assessing that it is urgently needed, and that Prava Crna Gora will support the introduction of stricter penalties for attacks on journalists. “This is urgent and expectit  to be in the Parliament soon,” Milacic announced.

He also problematized the competition for the general director of RTCG. “Public service is the key to the freedom of a society,” Milacic said, adding that the process of electing a director must be extremely transparent and without any conflict of interest.

Democratic Montenegro MP Tamara Vujovic pointed out the importance of the study  “Freedom of the Media and the Safety of Journalists through the Prism of Media Legislation in Montenegro” which was recently published by SMCG.

“The media scene is very diverse, we have a ‘flood’ of information. We should be especially worried about the data on the percentage of citizens who believe in conspiracy theories“, said Vujovic.

She pointed to a small number of warnings and revocations of media licenses by the Agency of Electronic Media (AEM). She also pointed out the procedure of registering the portals. “There is still a lot of data left ‘in the fog’, we have no imprints, ownership structure …”, said Vujovic.

Democratic Party of Socialists (DPS) MP Predrag Sekulic said that it was worrying that a large number of journalists went to work in the public sector. “We must provide journalists with not only freedom of reporting, but also favorable conditions for existence,” Sekulic pointed out.

He said that it is very difficult to regulate the field of the Internet. “No one can forbid anyone to establish a site and place information. The common task of journalists and politicians is to fight against false news”, DPS MP believes.

DPS MP Suzana Pribilovic said that most of the SMCG proposals for changes in the law are excellent. “However, I will refer to the criticism you made for not adopting the amendments to the Law on Free Access to Information (SPI). We planned to organize a conference, but we did not find understanding from the non-governmental sector and the media. After that came the election process. And now, after eight months, we have not changed the Law on SPI”, pointed out Pribilovic.

URA MP Bozena Jelusic said that the field of media is constantly changing, so that changes in the law are always necessary.

“We have a great influence of the media from the region. The media scene is changing and I don’t see that we are careful enough. We are under the impact of strong propaganda. We also have internal propaganda. That is why it is not surprising that trust in the media is falling. We still do not have a solution to the problem of self-regulation”, said Jelusic.

The representative of the Social Democrats (SD), Nikola Zirojevic, said that he was not satisfied with the current situation in RTCG. “The Council is still not free from political influence,” he said.

Commenting on the attacks on journalists, Zirojevic pointed out that political parties must find a consensus in order to improve the level of security of media workers.

“I am saddened by the fact that there is no solidarity in the media. “Regardless of ‘which side’ we come from, the abuse of the law must not be used for reckoning,” Zirojevic said.

The representative of the Socialist People’s Party (SNP), Luka Jankovic, said that the party is always open to all journalists, media and media associations, in order to find the best models for improving the media environment.

Special attention should be paid to the problem of protection of sources and provisions that require journalists to disclose sources of information. “If you give too much breadth in the law, in relation to when a journalist has to discover the source, we are entering a danger zone,” Jankovic pointed out.

Democratic Front (DF) MP Natasa Jevric said that SMCG will have support for all proposals that contribute to media freedom.

DF MP Maksim Vucinic pointed out that political parties must listen to the needs of journalists. “We have to deal with crime, because without that we cannot talk about any freedom,” Vucinic said.

The director of the Human Rights Action (HRA), Tea Gorjanc Prelevic, said that the organization proposed the definition of a journalist, relying on the Council of Europe. “We have been expecting a concrete discussion on this formulation for 10 years now,” Gorjanc Prelevic pointed out. She said the Media Strategy must be concrete, with a clear list of the needs of the media community.

“It is necessary to urgently resolve disputes concerning the appointment and dismissal of members of the RTCG Council,” said the director of the HRA.

The Secretary General of the Association of Journalists of Montenegro, Ivan Milosevic, believes that in the field of media work, laws are not the biggest problem, but that it is a political influence on journalists. He pointed out that journalists must organize themselves and determine regulations, without waiting for politicians to do so. “The less we are with politicians, the more we will be with ourselves,” Milosevic concluded.

At previous roundtables, Trade Union of Media of Montenegro brought together more than 50 participants from the media community, including journalists, editors, journalists’ associations and civil society representatives involved in the work of the media.

The roundtables are part of the project “Improving Dialogue between Journalists’ Associations and Parliaments in the Western Balkans for a Stronger Civil Sector” funded by the Swedish International Development Cooperation Agency (Sida) and implemented by the Balkan Civil Society Development Network (BCSDN).