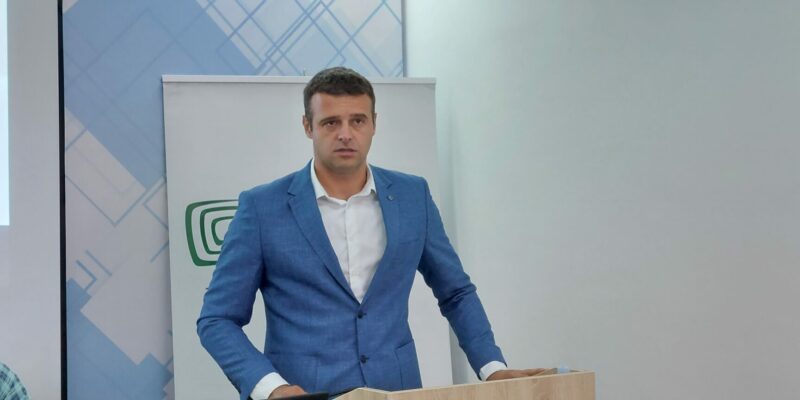 By Sindikat medija
Share
Journalist and editor Radomir Kračković is the new president of the Trade Union of Media of Montenegro, delegates of the 4th Assembly unanimously decided.
Kračković announced that in the next four years, the focus of his work will be on the adoption of the Branch collective agreement for the media sector, full respect for all labor rights in the media, greater safety of journalists and media workers, as well as increasing the number of Union members.
“Although they seem difficult to achieve due to the current media and social situation in our country, I believe that these goals are not unattainable. It is clear that they will need a lot of work, a firm attitude towards employers and decision-makers, but also the ability to impose solutions through conversations and negotiations that will provide a better position for our members and media workers. The media union will, as before, uncompromisingly stand by its members in the fight for a better tomorrow for our profession,” Kračković said.
The Assembly also elected a new Main Board for the next four-year mandate. The main committee will consist of: Jadranka Drobnjak and Danijel Čelecki (RTCG), Boris Pejović (Vijesti), Predrag Nikolić (Monitor), Edin Zuković (RTV Pljevlja), Enes Gusinjac (RTV Rožaje), Milena Bubanja Obradović (Radio Berane), Dragana Vlaović (RTV Herceg Novi), Suzana Mujić (Radio Ulcinj), Siniša Sanader (Radio Tivat), Marijana Camović Veličković (individual members) and Radomir Kračković (TV Vijesti).
In the introductory part, the recent president, Marijana Camović Veličković, presented the work of that trade union organization in the previous term, noting that a lot of work has been done, but also that the profession is facing numerous challenges.
“After doubling the membership in 2018 and joining three new trade union organizations, SMCG continued to work on the expansion of SMCG and significant progress was achieved in that segment. Over the past four years, the membership has been increased by three new trade union organizations – the Radio and Television of Cetinje, the Radio Ulcinj and the Radio Tivat, which joined our Trade Union in 2019. In this way, about 30 new members joined the Union,” she said.
Camović Veličković emphasized that during the previous four years, 14 researches were carried out, 217 advocacy activities, 16 public events were organized with domestic and international participation, and 245 press releases were sent.
In the introductory part, the deputy general secretary of the Union of Free Trade Unions of Montenegro, Ivana Mihaijlović, said that the enthusiasm, will, perseverance and courage of those who were at the head of the union made the Media Union an indispensable partner at all levels.
“You have gone through a thorny path since your establishment and we are proud of what you have achieved,” said Mihajlović.
The President of the European Federation of Journalists, Maja Sever, in a video message, thanked for the cooperation and pointed out that with its previous work, SMCG was a role model not only in the region but also in Europe.
“I hope that we will continue to cooperate, that we will continue to work together on the most important goals of our organizations, but also of the European Federation of Journalists, which is the strengthening and empowerment of male and female journalists,” she concluded.
30 delegates from 12 trade union organizations participated in the work of the Assembly.