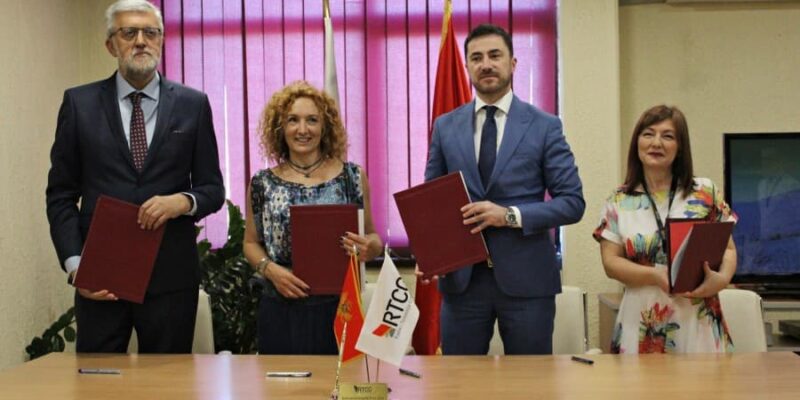 The Minister of culture Aleksandar Bogdanovic, the Managing Director of Montenegrin Public Broadcaster Service Radio Television of Montenegro (RTCG) Bozidar Sundic and the representatives of the trade unions Jadranka Drobnjak and Slavica Kruscic, signed the collective agreement for RTCG today.

For the first time, the economic and social position of employees in RTCG will be legally regulated with the collective agreement. In this way, the professional position of employees will be moved a step forward because the lack of this document made various pressures and discrimination in the Public Broadcaster Service possible.

With this document, employee salaries will be increased slightly after more than a decade in which they were at the same level. The increase in average is just a few dozen euros, but it will represent the minimum that ensures the dignity of employees.

The President of the Trade Union of employees of RTCG, which operates within the framework of the Trade Union of Media of Montenegro, Jadranka Drobnjak said that a valid collective agreement in the Public Broadcaster Service has not existed for almost 10 years and that the salary for that time largely stagnated or went lower.

“This is a great day in which the standard of the workers, who under such hard circumstances managed to pull off such great and responsible work, greatly improved. I want to assure you that it will now be even better and that they were greeted with the knowledge that we care for them in here”, she pointed out, adding the fact that they will continue to fight for a better position of their employees.

Among other things, the collective agreement guarantees receiving compensation for transport on a monthly basis, which was at one time an employer violated but the Trade Union of RTCG sought legal protection before the Agency for labour disputes.

In negotiations, the Trade Union was able to fight to guarantee that workers will receive compensation for the winter. All labor rights and obligations of both the employees and the employer are defined by this document. Collective agreement covers the overtime, safety at work, the method of determining redundancy and determines that the Trade Union monitors these processes.