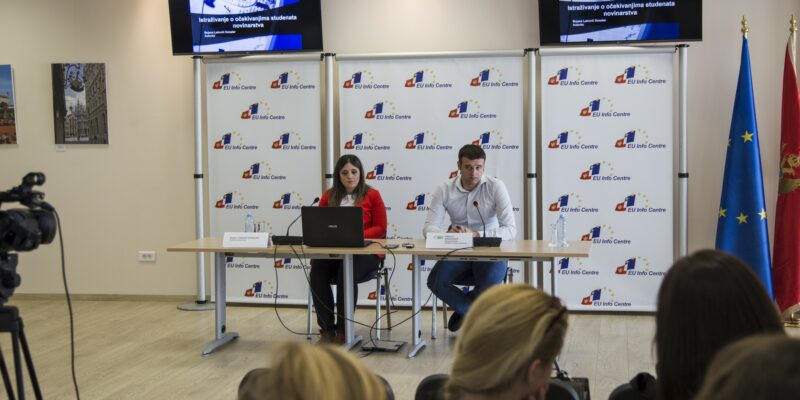 SMCG presented research on the expectations of students of journalism

A survey by the Trade Union of Media of Montenegro (SMCG) on the expectations of journalism students has shown that almost 90% of them believe that getting a job in the profession will not be easy. Almost a third of the students do not see themselves doing this profession – instead they see themselves in PR or some other vocation. A survey was presented at the EU Info centre.

“Half of the journalism students would love to work at TV stations, and a third would like to deal with entertainment topics,” said the author of the study, Bojana Laković Konatar.

The survey found that 45% of students enrolled to study journalism because they wanted to be socially engaged, and 43% because it is their “dream job”. Only 7% were motivated by the salary. This means that students have a high opinion about this profession even though they do not perceive journalism as profitable. They are guided more by the desire to change something and to work in the public interest than by personal gain.

“When it comes to the expectations from their studies, the largest proportion of students expect to become trained in media work (40%), 26% expect to establish contacts at university and find a job in the profession – this is most expected by first-year students. Twelve percent of the questioned students, mostly from the second and third years have no expectations,” said Laković Konatar.

“Fifteen percent of the respondents rated their practical experience as bad, while 7% of them rated it as very bad. Students’ opinions were also divided regarding the reasons why the practical time was good or bad. Thus, only 27% of respondents said that the media was sufficiently dedicated to them. On the other hand, 26% of students said that the media could not do that. The same percentage of them believe that media employees know how to pass on their practical knowledge, while 5% of future journalists said that their senior colleagues did not know how to do that,” Laković Konatar pointed out.

She also said that almost half of the surveyed students wanted to continue to work in journalism after graduating (45%). Still, 17% of them want to transfer to PR and 12% to find a job in another area. Also, 16% point out they will not insist on staying in the profession, but will work in any area in which they can find a job.

When it comes to assessing the answers according to the year of study, it is mostly first-year students that want to continue to work in journalism. Those who want to shift over to PR are mostly students in their second and the third years of study. The research has shown that it is mainly those who are satisfied with their practical experience that want to be involved in journalism. On the other hand, the majority of those who want to shift to PR are students who rated their practical experience as bad.

If they could choose, half of the students would like to work at a TV station, while print media features in second place. Next are portals, while the smallest numbers of students would like to try radio journalism. Students were asked to indicate which areas they would like to be involved with the most – of most interest to them are social and cultural topics. It is interesting that a large number of respondents indicated entertainment topics as their future interest (36%), rather than politics (32%). A possible reason for this is the fact that in recent years more and more media companies have based their programmes on news related to show-business.

When it comes to expectations from a future job, half of the students hope they will be able to advance in their career and earn enough for a “normal” life.

The survey was conducted via a questionnaire from 10 March to 10 April on a sample of 100 respondents: 25 students from each of the first, second, third and fourth years of journalism studies at the Faculty of Political Sciences of the University of Montenegro. This equals a half of the total number of enrolled students per study year.