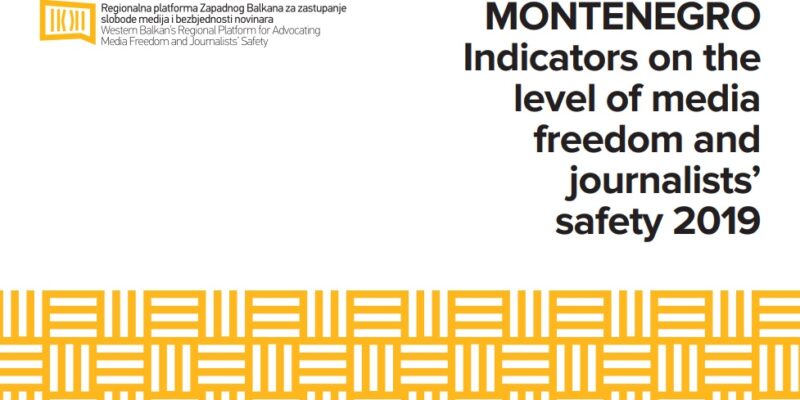 TUMM research on the level of media freedom

The Trade Union of Media of Montenegro (TUMM) has published, for the fifth time in a row, the research Indicators on the level of media freedom and journalists’ safety for 2019. Identical research was done during 2019 in Montenegro, Serbia, Bosnia and Herzegovina, Kosovo and North Macedonia, but due to problems caused by the corona virus, its presentation was postponed. The authors of the research are Marijana Camovic Velickovic and Bojana Lakovic Konatar, within the regional project Safejournalist.net, which was financed by the European Endowment for Democracy.

Recommendations relates to the necessity of adopting media laws have emerged from the three units covered by the research – the legislative framework, working conditions in newsrooms and the safety of journalists, so that the proposals and suggestions of TUMM, media associations and non-governmental organizations are taken into account as much as possible. It would ensure the strengthening of journalistic independence within newsrooms and thus try to influence the reduction of censorship and self-censorship, the strengthening of journalistic and financial independence of public services, especially local ones, and the increase of transparency of advertising from public funds.

“It is necessary to clearly legally oblige all media to register before the competent authorities. The state should abandon the proposed amendments to the Law on Free Access to Information in order not to further complicate the work of journalists in the public interest. The announced state assistance to private media through the Media Pluralism Fund should be based on clear and measurable criteria and should be conditioned by the fact that part of that assistance is felt by media employees through improving their economic position because they will be the ones to produce media content for which their media will receive money from this Fund ”, is part of the recommendations from the research that you can read and download here.

The necessity of the fight against censorship and self-censorship was emphasized, which should be the obligation of every journalist, as far as possible, because these phenomena have a very bad effect on the position of journalists and the overall media environment. Therefore, as stated, it is necessary to formally separate newsrooms from marketing services in the media and fight against the strong influence of large advertisers and owners.

“Due to the failure to resolve cases of attacks on journalists, it is necessary to finally determine the individual responsibility of police officers and prosecutors who were involved in the investigations. Cases in which some progress has been made must be fully processed. It is especially necessary to determine the perpetrators and motives of the attack. Journalists’ associations (trade unions and associations) should insist on all these proposals, because only in that way media environment in Montenegro can be improved. Even if all these proposals are adopted, the implementation will be a great challenge, so it cannot be a guarantee that the situation will really improve,” the research states.

The authors made a cross-section of the situation in areas related to the media and in addition to media and related laws that affect the environment and freedom of work of journalists, they published several testimonies of colleagues from newsrooms, who were their interlocutors within focus groups.

“The position of employed journalists did not change significantly in 2019 either, and they face the same problems as before: they easily lose their jobs, work during the holidays and overtime, and they are not paid for it, they are censored and prone to self-censorship. Those who dare to write articles about the main advertisers are punished and fired, which further increases self-censorship, and some journalists openly testify about that. There are no special rules for work in private / commercial media, while in the Public Service there are rules but they are not respected, ie. journalists were not able to work without pressure and censorship, which is confirmed by several cases that have been publicly exposed, “the research states.

There is a limited amount of data and research relating to women in journalism and their position. It can be concluded from them that women are discriminated against in the media on several grounds, although their number in leading positions has increased. Female journalists claim that they are not paid as much as their male colleagues in the same positions, that they are discriminated against because of motherhood and that it is difficult for them to return to the position they were in before their absence due to childbirth, and there are cases of sexual harassment.

When it comes to security, the statistics of the Police Administration show an increase in the number of cases of attacks on journalists, and according to those data, there were 11 of them in 2019, and a few years before that number was in single digits. Although there were no serious attacks on journalists and media property, there were threats via social networks but also physical attacks. Previous cases of attacks remain unresolved and attempts by police and prosecutors to change something are not effective enough and are not yielding results.

European standards for the safety of journalists