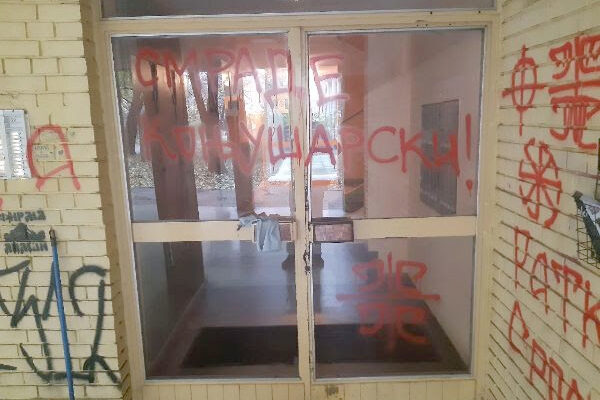 Neo-Nazi symbols and messages featuring hate speech sprayed on journalist Dinko Gruhonjic front door in Novi Sad, Serbia. The incident followed the publication of an article about graifties of similar content appearing in the city.

During the night of 23 – 24 November, graffiti full of nationalistic hate speech were sprayed at the entrance to the building where Dinko Gruhonjic, journalist and programme director of the Independent Journalists Association of Vojvodina. The entrance, including the wall and glass doors, was covered in messages using derogatory terms “Ustasa c**t this is not your city nor your country” and “Horseboy stink” featuring neo-nazi symbols swastika and Celtic crosses. One graffiti stated “Ratko Mladic Serbian hero”. The incident contains elements criminal deeds such as incident national, racial and religious bigotry and discrimination endangers the safety of Dinko Gruhonjic and his family. It took place days after Gruhonjic published an article “Novi Sad – national chauvinist province celebrating genocide?” that analyses troublesome content of graffiti that appear in Novi Sad.

The case was reported to the police and the public prosecutor as an attack on journalist due to Gruhonjic’s work. The police reacted promptly and started an investigation. Perpetrators are still unknown.

This is not the first time Gruhonjic was targeted. Currently there are a number of criminal cases before the public prosecutor, but Gruhonjic was a victim of different types of verbal threats, insults and pressures more than a dozen times, most recently during the state of emergency in 2020. In a statement for SafeJournalists Gruhonjic said that what hit him the most was not only the message, but also the way it was done:

“The message to move is very clear and the fact that those who did this came to my doorstep is worrying. Neo-Nazis are on loose and the authorities are not doing anything to stop them. But, the message of citizens, colleagues and friends from Serbia and the region who supported me in this moment is also clear and comforting,” – said Gruhonjic referring to the fact that a group of citizens removed the insulting messages the following day. Gruhonjic added that he hopes the authorities will solve this case.”

“Gruhonjic was often targeted by nationalist politicians, many of whom are currently holding important state positions. We have witnessed before how such public statements nurture an atmosphere in which dissatisfied citizens publicly and without delay send threats and insults to newsrooms and journalists.” – said Zeljko Bodrozic, president of IJAS and added that it calls upon the authorities to solve this case urgently and representatives of the state to condemn this incident and refrain from insulting and smearing journalists who work in public interest.

SafeJournalists Network, representing more than 8,200 media professionals in the Western Balkans, joins its member IJAS in condemnation of the attack on Gruhonjic. The messages and language not only constitutes hate speech; it also contains symbols of hate that have no place in a democratic society. While we welcome the prompt reaction of the authorities, we insist on solving this case urgently and securing Gruhonjic and his family safety. The Network greets the support to Gruhonjic by citizens of Novi Sad who organised and removed the insulting graffiti from his building and showed respect for Gruhonjic and other professional journalists in Serbia.

TUMM: State aid to the media must also be felt by employees

European standards for the safety of journalists

Marko Vidojkovic, Serbian journalist, writer and tv host of “The Good, the Bad and the ...
By Sindikat medija
21/06/2021