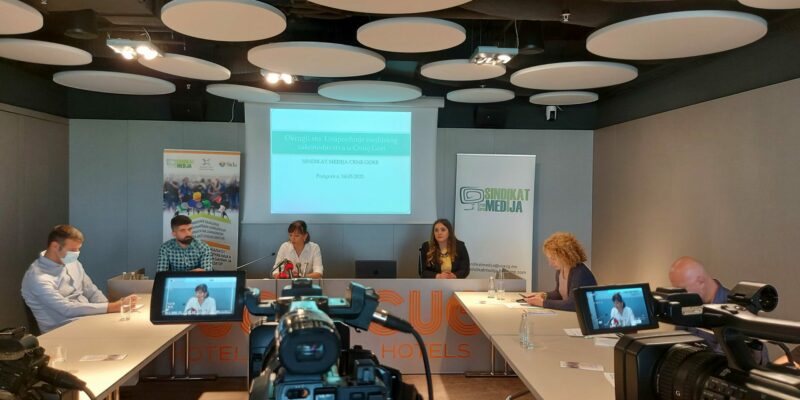 The debate on amendments to the media laws and the Criminal Code and negotiations on the adoption of a new Branch Collective Agreement needs to be restarted to improve the status of journalists and media workers in Montenegro. These are some of the main recommendations of the Trade Union of Media of Montenegro (SMCG), which today presented the study “Media Freedom and Security of Journalists through the Prism of Media Legislation in Montenegro”.

“Amendments to the Law on Media and the Law on the National Public Broadcaster RTCG have improved the overall media legislation of Montenegro. However, there are numerous objections to some solutions as well as certain ambiguities and shortcomings in these laws. Given that the new government has announced its readiness to reopen the dialogue on all media laws, it is necessary to use this to further define the legislative framework in the field of media,” the study said.

Researcher Bojana Laković Konatar said that all changes to media laws are desirable and good, but that before the changes it is necessary to understand the way media systems work and the nature of the problems that exist in the Montenegrin media. “Any spontaneous action will jeopardize the already poor working conditions and position of media employees and can only be counterproductive,” she said.

Lakovic Konatar especially referred to the problems of local public broadcasters. “Employees of Radio Ulcinj have not received any earnings since the beginning of the year, and that media currently broadcasts only music. For now, there are no announcements from the Municipality of Ulcinj, which is the founder, whether it will help them, “she said.

She added that the situation is difficult in RTV Pljevlja as well. “Employees are owed two salaries and over 400 thousand euros for taxes and contributions. Since the beginning of the year, their account has been blocked twice and they are threatened with bankruptcy “, stated Laković Konatar.

Journalists of local public broadcasters who attended the round table assessed that the situation in most local media is humiliating and that the problems exceed the possibilities of local self-governments. They said that the allocations from the budget for local media must be much higher and that they expect the announced Law on Audiovisual Media Services to resolve this issue.

Dragana Vlaović from RTV Herceg Novi said that the media increased the number of employees to 40. “We failed to negotiate the Collective Agreement. One salary and several months are late for taxes and contributions,” she said.

Enes Gusinjac from RTV Rozaje announced that the media has two reprograms. “Taxes and contributions have not been paid for the last three years. The total debt of RTV Rozaje is 580 thousand euros. Debt has been accumulating for years, the annual budget is only 185 thousand, and we have 27 employees. We are afraid of bankruptcy “, said Gusinjac.

Researcher Drazen Djuraskovic assessed that when changing the media legislation, media workers must be recognized with special care as real “gatekeepers” for the democratic functioning of society. “This means that the legislator should always keep in mind those who participate in the creation of media content and grant them adequate socio-economic, criminal, and professional protection. It turned out that the status of employees in the media does not correspond to the importance of their role in society “, said Đurašković.

New criminal acts should be introduced in the Criminal Code to increase the penalties for attacks on journalists, said the president of the SMCG, Marijana Camovic Velickovic.

“In the coming period, SMCG will continue the dialogue with the representatives of the civil sector and members of parliament to present all our suggestions, to improve the socio-economic position of media workers and their safety,” announced Camovic Velickovic.

The vice president of SMCG, Radomir Krackovic, expressed expectations that the judicial and prosecutorial bodies will dedicate themselves to unresolved attacks. “The relativization of attacks on journalists and media workers is especially dangerous,” Krackovic warned.

Vijesti journalist Jelena Jovanović assessed that there was a “big line of discord” among the media. “By no means should we accept that journalists be officials,” Jovanovic said.

Referring to the recent event when journalist Nebojsa Sofranac was insulted and belittled, RTCG journalist Danijel Celecki said that editors who assign journalists to work assignments should better anticipate possible consequences when reporting on certain events.

“We should criticize the decision of the editorial board to send our colleague Sofranac to report on an event that posed a high risk for him. Such decisions should have certain consequences for the editorial board, which has put the journalist in a dangerous situation. This applies to all media, “Celecki pointed out.

“We will ask the Council to acquaint us with this document, “said Drobnjak.

Photojournalists and cameramen are even more endangered than journalists in Montenegro, according to Boris Pejovic, a photojournalist and member of the SMCG Main Board. “Apart from daily attacks, verbal and physical, photo reporters have a problem that institutions and citizens do not know what our rights are, so there are bans on access, identification for too long, etc.,” he said.

Camovic Velickovic said that during 2020 and 2021, the state helped the media with 2.5 million euros. “We have to ask where that money went and whether the employees got a share,” she said.

The round table also assessed that the initiative on retroactive purchase of work experience for media employees for the period 2000-2010 should be considered. Work should be done on improving the position of freelancers.

The roundtable is part of the project “Improving Dialogue between Journalists’ Associations and Parliaments in the Western Balkans for a Stronger Civil Sector” funded by the Swedish International Development Cooperation Agency (Sida) and implemented by the Balkan Civil Society Development Network (BCSDN).

Round table “Improvement of media legislation in Montenegro”