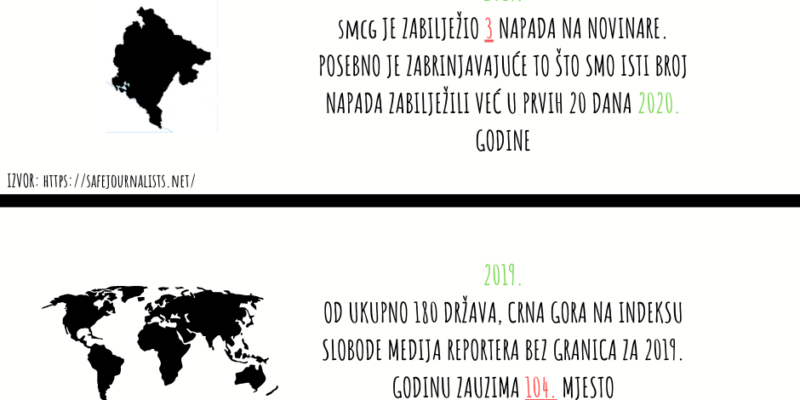 Challenges faced by journalists and employees of the Montenegrin media have remained unchanged over the past year. Also, some positive developments have been almost annulled by the negative trends that happened or being announced. The legislation, whose changes we wait a long time and we are hoping for them, has not changed. Therefore, no basis was provided for any changes for the better.

Nothing has been done about the safety of journalists and addressing previous cases of attacks against journalists. On the contrary, we began to face arrests of journalists, explaining that they were spreading panic by allegedly publishing fake news. This is a trend of this year, and we already have three journalists arrested. In 2019, we were informed that some of the most significant old cases of attacks on journalists (the murder of Dusko Jovanovic, for example) are probably finally closed, but in a way that it will not be illuminated. That public acknowledgment of the failure came from the highest addresses and now it is clear that some of the most serious cases of assault on journalists will be difficult to resolve and that no one still has been held accountable for errors in investigations. No progress has been made in the old investigations.

When we talk about positive events, it is important to emphasize the adoption of the collective agreement for Public Broadcaster Service Radio Television of Montenegro (RTCG), which improved the financial position of a part of RTCG employees, but this is not enough. Private media still did not go in that direction, so we urge them to finally start acting responsibly towards their employees and start negotiating collective agreements at the media level.

The amended Law of Media has not yet been adopted, although it has been talked about for exactly two years. The new Law on Audio-Visual Media Services (the current The Law on Electronic Media) has not been adopted either. This is a condition for improving the financial situation in local public broadcasters since employees of many local media are barely receiving earnings and they are close to be shut down.

Media business analysis shown that there was money in the media in Montenegro. Also, they have shown the leading media are in plus and that the amount of money they manage during the year is not insignificant. Despite this, media workers are still fairly underpaid.

Considering the adoption of the Collective Agreement for the RTCG, it can be concluded that during 2019 there were both progress and setbacks regarding the economic position of journalists and the increase of earnings in some other media, but there were (and they are still current) announcement of dismissals and reductions in earnings in one part of the media and we have a standard difficult situation in some local public service broadcasters. The adoption of new laws in the media area is still pending although adoption was announced at the end of last year.

For all these reasons, we call competent authorities at all levels (state, municipalities, private media) to do their work and to do it conscientiously, to respect the laws, not to abuse their positions and not to treat media employees as if they were subordinates or like they are second-class citizens. Because we are not.

We call on our colleagues on solidarity, to fight constantly and to not accept the violation of the rights which are guaranteed by the Constitution, laws and other applicable regulations, because this is the only way to improve our position in the workplace and thus affect our lives.

Regional platform: We condemn threats and insults on female journalists in North Macedonia