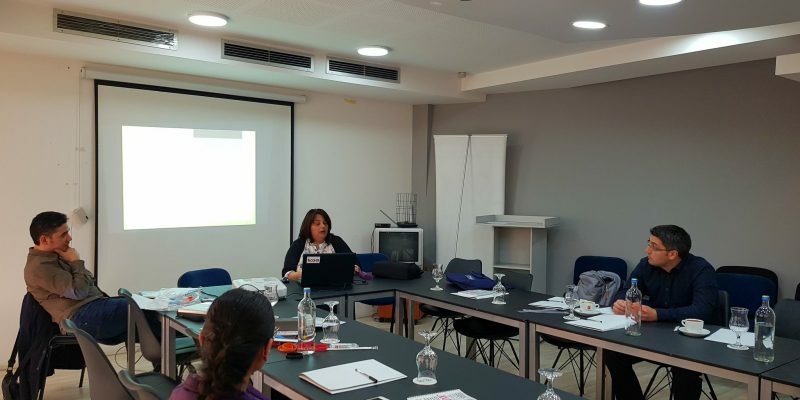 Held another training of trainers from the Western Balkans and Turkey

How to shape the future of journalists’ trade unions and associations in the Western Balkans and Turkey? The EFJ’s Labour Rights Expert Group Plus (LAREG+), composed of representatives from Albania, Kosovo, Macedonia, Montenegro, Serbia and Turkey, convened on the 10th of April 2018 in Skopje (Macedonia) to reflect on a one-year strategic plan to improve journalists’ working conditions in the region.

This meeting was the last of a series of trainings organised throughout the year 2017-2018 in the framework of the project Building Trust in Media in South East Europe and Turkey, financially supported by the UNESCO and the European Union. The aim of the meeting in Skopje was to reflect on what has been achieved at national level within the organisations in the previous year and what should be the main strategies for 2018-2019.  The participants shared national reports explaining the main challenges and suggested recommendations to improve the working conditions for journalists and media workers in the region. Some concrete examples of actions at national level include the following :

In Serbia, the journalists’ trade union (SINOS) is currently following the media strategy to be published this year in 2018 and is identifying the absence of employer’s organisations as the main problem to start sectorial social dialogue. The union has developed a strategy to address the issue at the highest level and will seek international support to achieve this goal. Additionally, SINOS has repeated the content of the training given in Podgorica for Serbian journalists. In Kosovo, the association (AGK) has been cooperating with labour inspectors to denounce violations of labour law. AGK is reflecting on the possibility to support the creation of a journalists’ trade union in Kosovo. The Albanian (APJA) associations have been raising awareness among their members on why it is important to fight for their rights and how to set the agenda on labour conditions at national level. In Montenegro, the media trade union (SMCG) has been lobbying to include amendments to the media law currently in discussion and is expecting to sign its collective agreement at the branch level In Macedonia, the trade union (SSNM) has taken legal action regarding copyright by helping journalists to protect their authors’ rights, notably with legal advices and support. In Turkey, the journalists’ union (TGS) surveyed women journalists to know what their needs are and address them. So what is the next step? The expert  Tamara Chausidis from the independent trade union of Macedonian journalists and media workers made a presentation on how to shape the future based on “reputation management for trade unions “. “It is all about reputation and branding your journalists’ union and association”, she said. Building trust with your members, improve the way you communicate, establish a vision, a mission and your core values were some of the key points she emphasised. The participants debated several options to develop their own reputation.

After the invitation of regional partners, Trade Union of Media of Montenegro created a video ...
By Sindikat medija
20/05/2021

Trade Union of Media of Montenegro presented  the main results of the project “Equality through ...
By Sindikat medija
18/04/2021

The Criminal Code of Montenegro should be amended in order to better protect journalists and ...
By Sindikat medija
15/04/2021