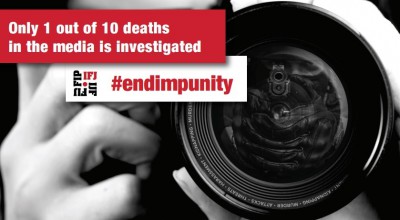 On this occasion, we sent an open letter to the Prime Minister Duško Marković.

We are addressing you on behalf of the Trade Union of the Media of Montenegro, a representative trade union organization that gathers around 300 employees of Montenegrin media, with the request to publicly declare today that you are against any form of violence against media employees in Montenegro and to demand from relevant institutions to investigate cases of attacks on journalists and the media.

We request this on the day which United Nations declared as the International Day to End Impunity for Crimes against Journalists and we urge you and all relevant institutions to stop with that practice.

We remind that for more than 13 years the state has not been able to find out who, why and on whose order was killed director and editor-in-chief of Daily Dan Duško Jovanović. We also, remind that it was allowed for statute of limitations to expire for the case of brutal beating of a journalist Mladen Stojović, and that regarding that case even some basic things were not done in order to solve it. On the contrary, terrible mistakes and omissions were made.

During the next year, statute of limitations will expire for other cases in which there has been no progress for years, and it seems, that there will not be any.  These cases are the second attack on journalist Tufik Softić and setting up explosive devices at Vijesti newsroom.

Having in mind all this, we believe that your reaction is of utmost importance and we kindly ask you to present it to media employees and public as well.